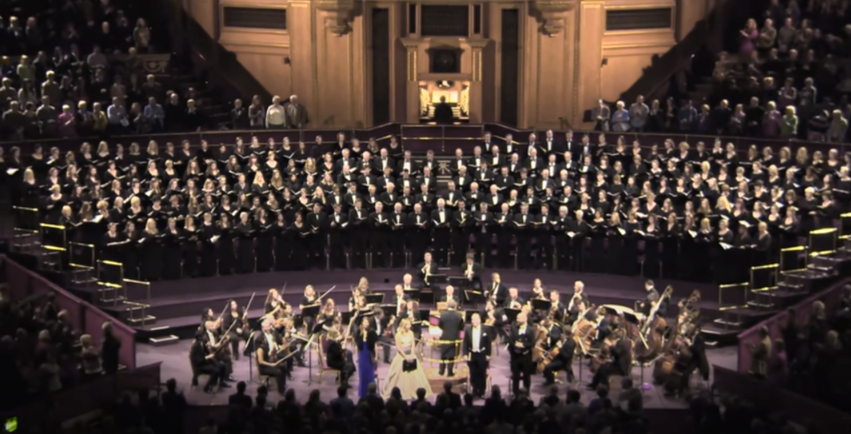 Image above is from Royal Choral Society: ‘Hallelujah Chorus’ from Handel’s Messiah, with audience standing. YouTube.

It is strange to see a scene in the book of Revelation that ends in the wrong chapter. Chapter 22:1-5 should have been included in Chapter 21. So Revelation 21:22-17 is the next to last scene of the New Heavens and New Earth.

The application of the descriptive sections of the New Jerusalem is—

The use of earthly things to represent heavenly realities is relevant to believers throughout the age of the church. When First Century believers listened to the description of heaven, they would see how different the culture of the New Heavens and Earth is from the one they lived-in in Roman Imperial cities.

Note carefully Imperial Propaganda differs from the reality of life in the Empire. “The Romans developed a sophisticated world-view which they projected successfully through literature, inscriptions, architecture, art, and elaborate public ceremonial.” (see Faulkner, below.) Note Virgil’s Aeneid as a “mission statement” for the Empire: ‘But you, Roman, must remember that you have to guide the nations by your authority, for this is to be your skill, to graft tradition onto peace, to spare those who submit, but to crush those who resist.’ (Virgil Book 6; lines 851-854.)

Life was pretty miserable for the underclass in the Roman Colonies. They lived in “high-rise” apartments called Insulae (islands).

“So much of Asia [Minor’s] land was dedicated to producing olive oil and wine for profitable export [to Rome] that its own cities often needed to import grain from Egypt or the Black Sea. Thus while owners and shippers profited, most people in Asia often had to pay higher prices for their food. (see Keener, p. 204-205; below.) Christians in Ephesus with 250,000 people would have longed for the expanse of the New Jerusalem! We ought to long for it more than we do for winning the Powerball Lottery at $500 million.

So much for Roman patriarchal care of its colonies. The propaganda painted a rosy picture, but the poor and infirm were on their own for means of making a living. One look a the New Heavens and Earth gives us a picture of who really cares for His people—God.

We need to see today how God’s values differ from our own society’s values.

vs. 22 And I saw no temple in the city, for its temple is the Lord God the Almighty and the Lamb.

The word for “temple” is naos, inner sanctuary. There is no specific sanctuary because the whole city is one. It is  patterned after the perfect cube of the Holy of Hollies as has already been pointed out.

John 4 tells of worship in the future.

19 The woman said to him, “Sir, I perceive that you are a prophet. 20 Our fathers worshiped on this mountain, but you say that in Jerusalem is the place where people ought to worship.” 21 Jesus said to her, “Woman, believe me, the hour is coming when neither on this mountain nor in Jerusalem will you worship the Father. 22 You worship what you do not know; we worship what we know, for salvation is from the Jews. 23 But the hour is coming, and is now here, when the true worshipers will worship the Father in spirit and truth, for the Father is seeking such people to worship him. 24 God is spirit, and those who worship him must worship in spirit and truth.”

The Samaritan woman changed the subject on Jesus. She wanted to ask where people ought to go to Church? Jesus answered, “People are the Church!” (I’m stretching the verses with the word Church to speak to us today.)  Like the Samaritan woman, we need to get used to the idea of worshiping in Spirit (from a regenerate heart) and in Truth (according to the Scriptures).

“The lack of a temple in the new Jerusalem (21:22) contrasts starkly with traditional Jewish expectations of the end time, in which a new temple was the central feature of the city.” (See Keener; p. 497, below; emphasis mine.) As Keener points put even Roman and Greek pagans would have thought this image of the New Heavens and Earth to be strange. All pagan cities had multiple temples to their patron gods and to Augustus Caesar.

Why no separate temple? God Himself is the temple and all who dwell there are in Him and He in them! This passage doesn’t contradict the passages in the prophets that speak of a temple restored when Messiah comes especially Ezekiel and Isaiah.

The image of the very end includes the closet possible communion between God and mankind. Let me add, we are warming up for this in time and space when we meet with fellow believers to worship God.

A Personal Relationship with God 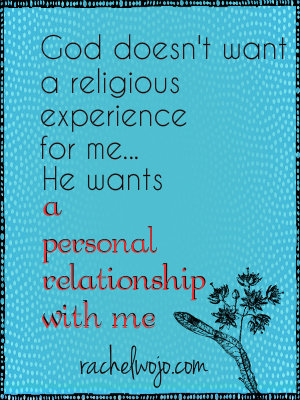 I believe we need to see the real meaning of John 3:16 “For God so loved the world,  that he gave his only Son, that whoever believes in him should not perish but have eternal life.” (Alternative translation in margin for ESV—”For this is how God loved the world.”)

Most people interpret the word “so” (houtōs in Greek) as referring to “the great amount of love God had for humans.” I would say the amount of love is not in doubt or in view. Houtōs means “in this way.”) See Biblehub G3779, below.) John is saying that God’s love for humans is expressed in this way—He sent His Son to die for humans. This is why God doesn’t recognize alternative ways to His heaven. I am not free to make up my own way if I don’t like God’s way.

The Purpose of Prayer

“The purpose of prayer is not to access the vending machine of God’s blessing. He’s not a Genie of the lamp or [an ATM, materially or spiritually]. Rather, prayer is [consciously] inviting God into our circumstances, into our hopes, into our fears, into our dreams, and into our pain.

“Prayer is not working our way through a grocery list of requests that we desire God to perform or answer the way we expect him to. Prayer allows us to live relationally with God. Living relationally means [we] can learn to talk to God, listen to God, and think about God throughout your day—as [we] wake up in the morning, soak in the tub, drive to our next destination, sit in our favorite chair, go on a walk, compete in a volleyball tournament, or relax in a favorite place of rest.” (see Illustration Ideas, below.)

II. God is our light in the New Jerusalem vs. 23

vs. 23 And the city has no need of sun or moon to shine on it, for the glory of God gives it light, and its lamp is the Lamb.

Punching Holes in the Darkness

Robert Louis Stevenson (1850-94), the author of classic books like Treasure Island, Kidnapped, and The Strange Case of Dr Jekyll and Mr Hyde, spent his childhood in Edinburgh, Scotland. Apparently, one evening, when he was a young 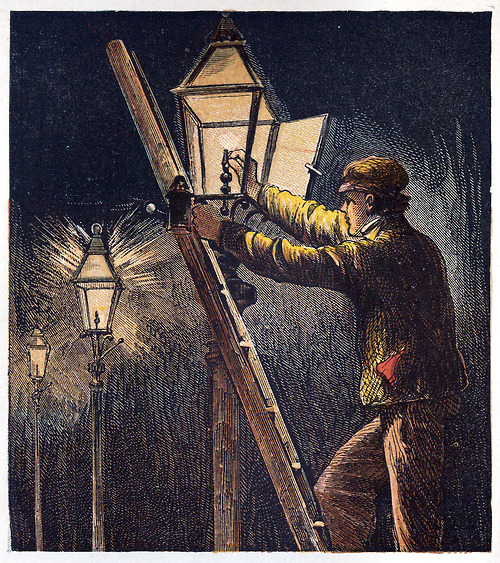 child, as dusk was turning to darkness, Robert had his face pinned to the window at the front of his house fascinated by the lamplighter coming down the street, with his ladder and burning wick, lighting the old-fashioned gas street lamps and setting them ablaze for the night.

Seeing their son glued to the window, his parents asked him, “Robert, what in the world are you looking at out there?” With great excitement he exclaimed, “Look at that man! He’s punching holes in the darkness!” (see Hudgens, below; picture right is from the site too.)

Our Lord Jesus did that for us in this world by dying on Calvary’s tree and rising from the dead. His teachings are written down for us to give light.  Psalm 119:105 Your word is a lamp to my feet and a light to my path.

God will banish darkness forever in the next world. His glory will give us light.

III. God will receive worship from all nations in the New Jerusalem. vss. 24-26.

vs. 24-26 24 By its light will the nations walk, and the kings of the earth will bring their glory into it, 25 and its gates will never be shut by day—and there will be no night there. 26 They will bring into it the glory and the honor of the nations.

This is a picture of a city bustling with life and activity. (It is not, as we have already seen, a description of the  Millennial kingdom of Christ.) These are the saved out of the nations who enter the new heavens and earth. The Kings of the earth now bring their glory into the city and cast it at the feet of the Lord God Almighty. Freed from self-centeredness, the rulers of the world live for the glory of God.

Custom and The Hallelujah Chorus from Handel’s Messiah

During the week of her coronation, the beginning of her reign, aka “The Victorian Era”, Victoria was sitting in the Royal  Lodge while Handel’s “Messiah” was being performed.

The lady-in-waiting came up and said, “Everybody in the room with the exception of the Queen will rise and will remain standing for the duration of the Hallelujah Chorus. It is royal etiquette that the Queen should remain seated.”

When the “Hallelujah Chorus” began, the people rose and stood with their heads bowed. It was obvious that the Queen was deeply moved.

In spite of the royal etiquette, the young Queen rose and remained standing with her head bowed till the music ended. She said, “No way will I sit in the presence of the King of kings.” (see Lopez, below.)

Later in life, Queen Victoria said, “I am saved by the letter M!” In I Corinthians 1:26 Paul wrote—”For consider your calling, brothers: not many of you were wise according to worldly standards, not many were powerful, not many were of noble birth.”

Yet Victoria made sure to honor the Lord of Lords and King of Kings! (see Lopez, below.)

IV. God will maintain the purity of the New Jerusalem. vs. 27.

vs. 27 But nothing unclean will ever enter it, nor anyone who does what is detestable or false, but only those who are written in the Lamb’s book of life.

This verse disproves universal salvation as propagated by some. God’s offer of salvation is genuinely universal.  However, there will be those who refuse to accept that offer. Those ones who refuse will be excluded from the New  Heavens and Earth. It will be by their own choice that they will not participate in God’s new order.

The Hymn “Jerusalem the Golden” was written by Bernard of Cluny (ca. 1100 to ca. 1199). The melody is from Gustave Holst’s “The Planets:  Jupiter.” The melody is usually sung to the lyrics “I Vow to Thee, My Country,” which I first heard at Princess Diana’s funeral on TV.

Next time, we will move to Chapter 22:1-5 since that passage concludes the subject begun in Chapter 21.

Illustration Ideas. (n.d.). What Prayer is Not, Blog. Accessed 28 July 2021 from https://illustrationideas.bible/what-prayer-is-not/