I don’t often refer to personal experiences in this blog, but I am about to do so. The names are changed, so that no one can identify the persons and places.

I was barely settled into a new pastorate at a church. I had expected other groups to let a sufficient time pass before inquiring about the possibility of my changing church settings. I had been in residence where I was for about two weeks and my family was preparing to go on vacation and begin work after one month had elapsed.

When I got back from vacation, my answering machine tape (yes, it was that long ago) was filled with messages from a man who had been head of an organization I had been affiliated with in the past. The messages began, “I need you to call me about taking the pastorate of such-and-such congregation.” The message was repeated several times. Later on, the messages got desperate, “I need you to call me today about taking the pastorate of this congregation!” The tone was one of urgency and then it became desperation.

When I got back, I picked up the phone and called a friend in that organization about the messages I had recently received. I explained I was on vacation and had just phoned to say I was not interested in making a move so soon after agreeing to take up the pastorate where I was. This was not the first time I was asked by this person to take over the pastorate of this particular church, and it wasn’t the last. At no time did I sense the call of God in his invitation. 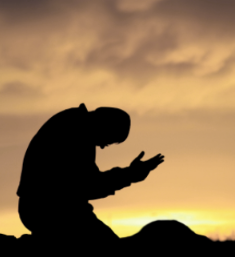 There is something wrong about being asked to hurry making life-altering decisions to suit another person’s need. It can be dangerous, even. In my case I didn’t feel the pressure until I got home. Even then, I did not feel pressure to move to another church. I knew God had placed me where I was for His own reasons.

Daniel felt the pressure of his circumstances since it was a life and death matter. The King said to his diviners, “Give the dream and its interpretation or off with your head.”

Note carefully, Daniel didn’t react to the threat. He did offer a way out. How can this be? A slave from a conquered land was setting the timetable for the great Babylonian Empire.

This passage teaches us that we can safely navigate through a dangerous and ungodly culture by following God’s wisdom in His Word. This is exactly what Daniel did.

14 Then Daniel replied with prudence and discretion to Arioch, the captain of the king’s guard, who had gone out to kill the wise men of Babylon. 15 He declared to Arioch, the king’s captain, “Why is the decree of the king so urgent?” Then Arioch made the matter known to Daniel. 16 And Daniel went in and requested the king to appoint him a time, that he might show the interpretation to the king.

Daniel is aware of the life and death situation when he saw the chief of Nebuchadrezzar’s bodyguard coming toward his house. He said a prayer, no doubt. It wasn’t a long-drawn-out prayer. He was already “prayed-up,” like the old folks used to say. (“Prayed-up” meant he had confessed his sins up to date and was in fellowship with God.) Like Peter’s prayer when he sank into the water, “Lord, save me!” Daniel’s quick look to God was enough when he was in danger (Matthew 14:30).

Note Daniel used prudence and discretion. “The faculty which discriminates and selects what is suitable for a given occasion.” This could be paraphrased with tact or tactfully.

John Calvin says this, “Daniel’s power of acting so composedly, arose from God’s [extraordinary] gift, since terror would otherwise have seized on his mind; for we are aware that in sudden events, we become deprived of all plans, and lose our presence of mind. Since nothing of this kind was perceived in Daniel, it becomes clear that his mind was governed by God’s Spirit.”

Image above is “Colorful Splendor” by James C. Lewis.

Daniel was concerned about the haste with which the penalty of the King was being carried out. The word is in the Aramaic section of Daniel as opposed to the Hebrew section, so the normal dictionary of Hebrew BDB, is not helpful. The word can be in the range of haste or severity. In this case, it could be either or both.

Call on the Source of Wisdom First

People are accustomed to calling on special persons for prayer in an emergency. I had a friend once who saw an emergency arise in his family. His mother and father had their pastor on “speed-dial” as we would say today. The problem was their pastor wasn’t at home.

My friend said, “Hey, doesn’t our pastor say we ought to call upon God ourselves?” They agreed he was right, so they went in and knelt by their bed and asked God to help them! God did. They cut out the middleman from that time on went to God first in prayer on their own before asking for help. That doesn’t mean they never asked for help when they needed it. They never again permitted a man to take the place of God in their lives.

II. We often come into situations that are beyond our abilities to cope, so we ought to call on others to pray with and for us. vs. 17-18

17 Then Daniel went to his house and made the matter known to Hananiah, Mishael, and Azariah, his companions, 18 and told them to seek mercy from the God of heaven concerning this mystery, so that Daniel and his companions might not be destroyed with the rest of the wise men of Babylon.

I mentioned above the fact that no one should take God’s place in our lives. Now, I am saying we ought to ask for prayer assistance from others when we are weak and in need.

I like the fact that Daniel always refers to his friends by their Hebrew names. He has to call himself and them by their assigned Aramaic names at the King’s court. But, not at home!!!

We need the prayer support of friends now more than ever. We are living through a satanic deception that arose in the 19th Century and extends to the present, though it is a failed worldview and is in the throes of death. Dying worldviews become dangerous when they lose their grip on the masses. Chaos and anarchy become the norm.

We live in the modern house that this infernal trifecta built. European elitists (after Darwin, Marx, and Freud) set about creating a civilization without Christianity. The modern house is in shambles and about to fall in.

I have quoted this before—”The attempt to create a culture which would be European without being Christian … is now recognized as the main cause of the present crisis in European civilization.” (from Oscar Halecki, Borderlands of Western Civilization: A History of East Central Europe, p. 296). That churchmen in great numbers are a part of this revolution, this de-Christianization of the West, is an amazing as well as an ugly fact. (Sovereignty, by Rushdoony)

Science is the arbiter in disputes between religion and secular humanism.

C.S. Lewis well said, [Prior to the Enlightenment] “The sciences long remained like a lion-cub whose gambols delighted its master in private; it had not yet tasted man’s blood. … [But] when Darwin starts monkeying with the ancestry of Man, and Freud with his soul, and [the Marxist economists] with all that is his, then indeed the lion will have got out of its cage. Its liberated presence in our midst will become one of the most important factors in everyone’s daily life. De Descriptione Temporum Inaugural Lecture at Cambridge University as Professor.

III. When God shows us the way, we can succeed without giving into the ungodly and pagan rulers in our lives. vs. 19a.

19 Then the mystery was revealed to Daniel in a vision of the night.

I’ve already alluded to Geerhardus Vos’s distinction of the distinction between dreams and visions in the Old Testament. Dreams came to those who were not in a personal relationship with God or were far from walking with Him. In other words, dreams in Scripture are for those who are spiritually dead or immature. Visions come to those are mature and in close fellowship with God.

Daniel doesn’t run to the King. He pauses to give God the glory for what He has revealed.

19 Then Daniel blessed the God of heaven.

20 Daniel answered and said:
“Blessed be the name of God forever and ever,
to whom belong wisdom and might.
21 He changes times and seasons;
he removes kings and sets up kings;
he gives wisdom to the wise
and knowledge to those who have understanding;
22 he reveals deep and hidden things;
he knows what is in the darkness,
and the light dwells with him.
23 To you, O God of my fathers,
I give thanks and praise,
for you have given me wisdom and might,
and have now made known to me what we asked of you,
for you have made known to us the king’s matter.”

I do not want to break up this prayer for the sake of analysis. The words are clear in meaning and I want to pray it instead of dissecting it. 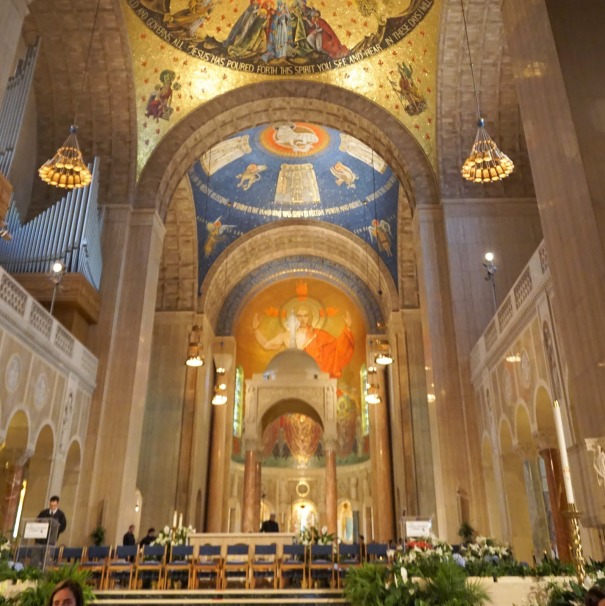 This is an interior of the National Shrine of the Basilica of the Immaculate Conception. The apse contains, as do many churches in the East, a mosaic of Jesus as Pantocrator or Pantokrator, “Ruler over all.”

V. We can give the solution of problems in secular society even though pagans do not recognize the God of the Bible. vs. 24

Some wise saint of God told me this, “God is never in a hurry, but He’s never late!”

Next time, we will take up the solution that Daniel gave King Nebuchadnezzar.