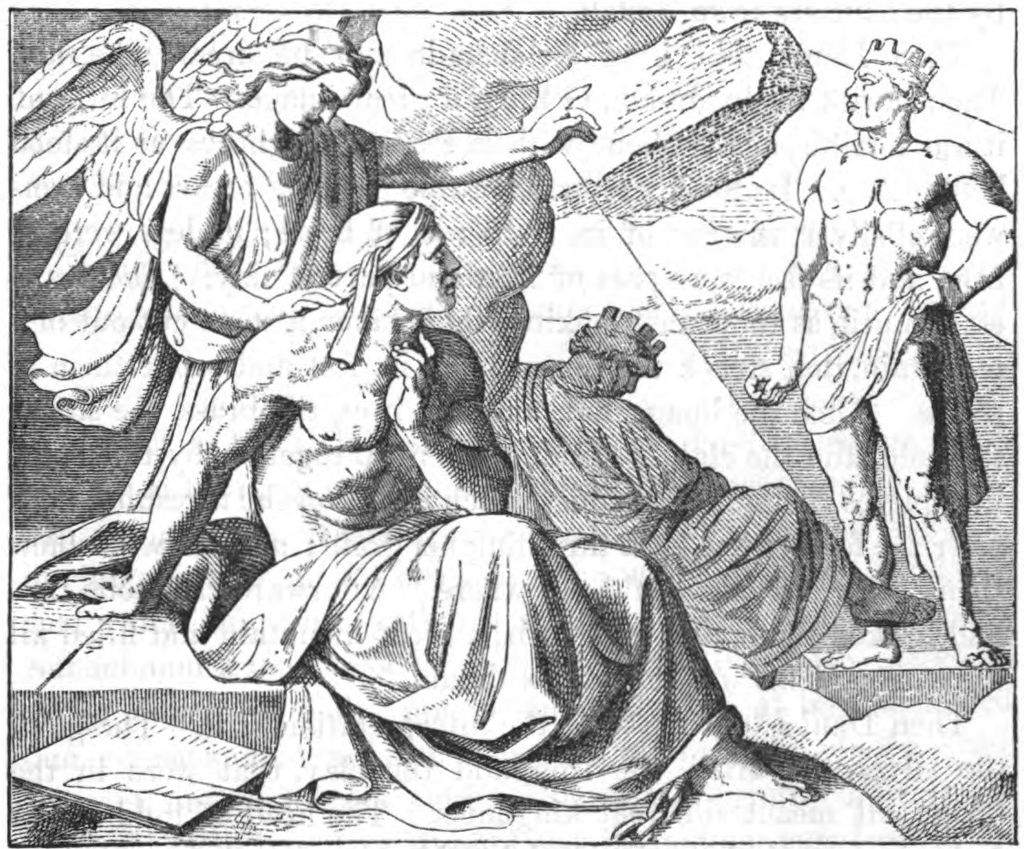 Image above is in the public domain; digitized by Google.

In the West, we do not at present face death if we profess faith in Jesus Christ as our Lord and Savior. In the rest of the world, faith in Christ is dangerous to those who confess the Christian faith. Daniel is the OT Book most persecuted believers around the world read. The NT favorite go-to book in persecution is Revelation.

Look at the expression on the former leader’s face if you want to know what is going to happen to him. Xi is always smiles. One comment from YouTube is telling, “Chinese officials later said Hu was ill. I think they meant he will BE ill very soon.” (Emphasis by commenter.)

It is dangerous to stand in the way of a tyrant, or to disappoint him. Daniel and his three friends are in trouble in Dan. 2., and don’t know it until much later.

Daniel Chapter Two teaches us that The God of Heaven alone commands the future.

I. Tyrants are often troubled about their office. vs. 1

Looking at the structure of verse1-13, we see a book-end structure. 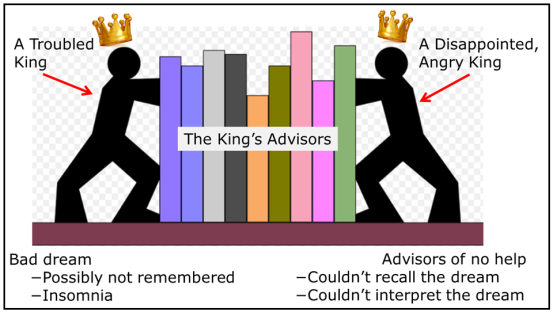 vs. 1 In the second year of the reign of Nebuchadnezzar, Nebuchadnezzar had dreams; his spirit was troubled, and his sleep left him. (ESV; emphasis mine)

We should realize that God could and did speak to a pagan leader about the future. A dream is best

vehicle suited to this kind of revelation.

“In dreaming, the consciousness of the dreamer is more or less loosened from his personality. Hence dreams were preferably used as a vehicle of revelation where the spiritual state was ill-adapted for contact with God. …Heathen persons receive revelation through this medium [Gen. 20:3; 31:24; 40:5; 41:1]. Within the chosen family, dreams were utilized likewise where the spirituality of the person was immature or at a low ebb [Gen. 28:12; 31:11; 37:5, 9].” (See Geerhardus Vos. Biblical Theology: Old and New Testaments.)

God came to Nebuchadnezzar in the night because he was not spiritually awake to God. He dreamed and became troubled thinking the dream might portend his destruction.

Nebuchadnezzar had had a difficult time subduing kingdoms despite his eventual victories. He was troubled in his sleep. Leaders who do not know God tend to be insecure.

As Shakespeare points out—
“Uneasy lies the head that wears the crown.”
Henry IV, Part II, Act III, scene 1. Everyone around a leader wants him to be easy and relaxed.

Reconciling the Date of the King’s Reign

I agree with Sinclair Ferguson: “The fact that we cannot yet answer all questions is no reason for ceasing to believe it is God’s word any more than our imperfect knowledge of the working of the human body is a reason for ceasing to breathe.” (The Preacher’s Commentary – Vol. 21: Daniel.) For the schemes harmonizing the years see the ESV Study Bible or a commentary on Daniel.

I can live with mystery. I want to be pleasantly surprised when I arrive in heaven. Like Samuel Clemmons, I am not young enough to have all the answers to life’s questions.

I am interested in the spiritual principles for Christians today in persecution by unbelievers or anti-Christian forces. We must not imitate Daniel or his three friends directly. Remember the actual circumstances of Daniel, etc., are a part of redemptive history. We must learn to act out of the general principles the text teaches. We must not imitate all details of Biblical characters.

v. 2 Then the king commanded that the magicians, the enchanters, the sorcerers, and the Chaldeans be summoned to tell the king his dreams. So they came in and stood before the king.

The “spiritual advisors and divination team” were summoned to appear before the troubled tyrant. “Chaldean” carried a twofold meaning: (1) Chaldean could be simply an ethnic term for those who lived in the Babylonian Empire; (2) Chaldean also had a specialized meaning for those who practiced the “magical arts.”

1. The Magicians (khar-tome’), were found also in Egypt (Genesis 41:24). They are so named from cheret, a “stylus”—those who went about with the stylus, the priestly class of the temple scribes, those learned in the sacred writings and in literature.

2. The Enchanters (ash-shawf’) meaning conjurers, to breathe, to blow, to whisper; for they practiced their incantations by movements of the breath.

4. The Priestly caste of the Chaldeans (kas-dee’Keil and Delitzsch), who are named, Daniel 2:4, Daniel 2:10, and Daniel 1:4, as the most distinguished class among the Babylonian wise men. [These terms were taken from Keil and Delitzsch OT Commentary on Daniel.)

There are four main categories of advisors Nebuchadnezzar summoned. The King didn’t want to slight any advisor. That Daniel and his three friends weren’t summoned may mean they were still absorbed in their studies at this point.

vs. 3 And the king said to them, “I had a dream, and my spirit is troubled to know the dream.”

vs. 4 Then the Chaldeans said to the king in Aramaic, “O king, live forever! Tell your servants the dream, and we will show the interpretation.”

The King is no fool. He knows the dream has to do with his future. He will ask his advisors to do two things: (1) Recount the dream for him; and (2) interpret his dream.

This was the normal procedure. King = tells the details of his dream; and Chaldeans = interpret it for him. Ancient soothsayers would use books of written oracles to interpret a King’s dream. Nebuchadnezzar knew it was possible for soothsayers to give the King what he wanted to hear, e.g., blow sunshine up his pant legs to make him return to calm and good humor.

The Priestess Pythia in Ancient Greece

The practice of interpreting the word of Apollo entailed that the Pythia bathe in the Castalian Spring, which was followed by the sacrifice of a goat. She then descended into a special chamber called an adyton beneath the temple which was fumigated with barley meal and laurel leaves on a burning hestia. There, at the temple center, the Omphalos, she sat on a covered tripod cauldron over a deep well-like chasm. Seated in this way, enveloped by vapors while shaking bay branches, the Pythia would fall into a trance state and channel the god. In this way did the Pythia pronounce judgment and prophecy to those in attendance.

It is a Hellenic tradition that the Pythia entered her trance through the influence of volcanic fumes or hallucinogenic gases emerging from a crevice in the floor of the Castalian Spring (see the picture left for the Greek concept of oracles). Although the sanctuary lies directly above two geological fault lines and the spring near the sanctuary contains ethylene, which can provoke hallucinations, there has been no conclusive determination on whether the trance states of the Pythiai were induced through exposure or was self-induced.

One such example of an ambiguous prophecy involved a general of an army coming to the Pythia for a prediction of whether he would win the battle. She replied, “Your soldiers will carry you on the shoulders from the battlefield.”

He thought it would be a response by a victorious army to a win by their general. In fact, his dead body was carried from the battlefield after his army lost.

Image above to the left is “Priestess of Delphi” by John Collier, 1891. Public Domain image. Information and image from https://www.worldhistory.org/Pythia. Material submitted by Gabriel H. Jones, published on 30 August 2013. The copyright holder has published this content under the following license: Creative Commons Attribution-NonCommercial-ShareAlike license.