Picture above is in the public domain. published by Thomas Agnew and Sons, 1892

1 In the third year of the reign of Jehoiakim king of Judah, Nebuchadnezzar king of Babylon came to Jerusalem and besieged it.

I know, as did I, you probably sang “Dare to be a Daniel,” either at Sunday School or at VBS.

Refrain:
Dare to be a Daniel!
Dare to stand alone!
Dare to have a purpose firm!
Dare to make it known!

It’s has a snappy tune still appealing to children even though it was written in 1873 by P. P Bliss. But is this the message of the book of Daniel?

I think Daniel 7 gives the message of Daniel.

13
“I saw in the night visions,
and behold, with the clouds of heaven
there came one like a son of man,
and he came to the Ancient of Days
and was presented before him.
14
And to him was given dominion
and glory and a kingdom,
that all peoples, nations, and languages
should serve him;
his dominion is an everlasting dominion,
which shall not pass away,
and his kingdom one
that shall not be destroyed.

The main lesson of Daniel, then, is not, as is often assumed (and taught!), Dare to be a Daniel! Rather, the main point is this: Dare to trust in Daniel’s God! [from Wilson, T. (2015) Daniel (Knowing the Bible series). Carol Stream, IL: Crossway Publishing. Kindle Edition.]

I. Jesus began to fulfill this prophecy by His incarnation.

Ellicott says this of the phrase “One like a Son of Man”—”The title implies one descended from man; but as this Person is spoken of as being like one of human descent, it follows that He was not merely a man. The early Jewish and Christian interpretations that this is the Messiah are confirmed by our Savior’s solemn appropriation of the title to Himself (Matthew 24:30).”

Westminster Shorter Catechism clarifies the Son of Man and God—

This Catechism question delineates the two natures of Christ—”God and man in two distinct natures and one person, forever.” He bridged the chasm between God and humans by obeying God as the God-man and by dying in our place.

II. Jesus at present has the dominion over all in heaven and earth, so we can trust Him.

We are in the expanse of time time between the first Coming and the Second Coming. Jesus is King of Kings and Lord of Lords now. Hebrews 2 gives us where we are—

We are between two days—(1) Calvary, the day Christ died for our sins; and (2) the Second Coming, the day when Christ will vanquish all His and our foes. Where we live is referred to as “the already, but not yet.”

We are closest to the power that moves heaven and earth when we kneel before the Throne of Grace. (see Hebrews 4:14-16).

Daniel’s people lived between two days: (1) their exile from their land, and (2) their return to that land.

I have forgotten where I read this information, but I put it in chart form. (At least the first question came from Hamilton, J. M., Jr. (2014). With the Clouds of Heaven (New Studies in Biblical Theology series), p. 41. Downers Grove, IL: InterVarsity Press. Kindle Edition. 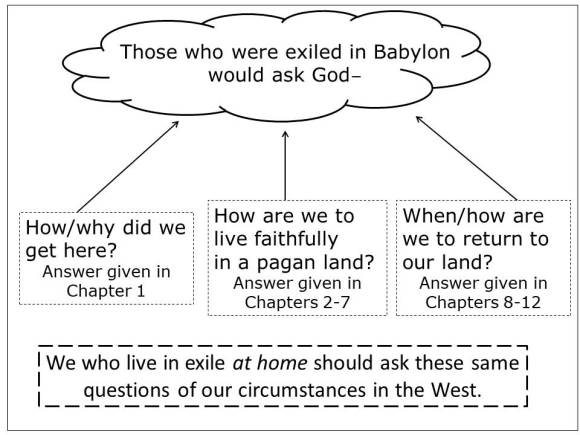 The song is cute, but let’s alter its lyrics—

Dare to trust Daniel’s God!
Dare to stand with Him!
Dare to have a purpose firm!
Dare to make it known to men!

We can live this refrain out in our lives with Daniel’s God with us.