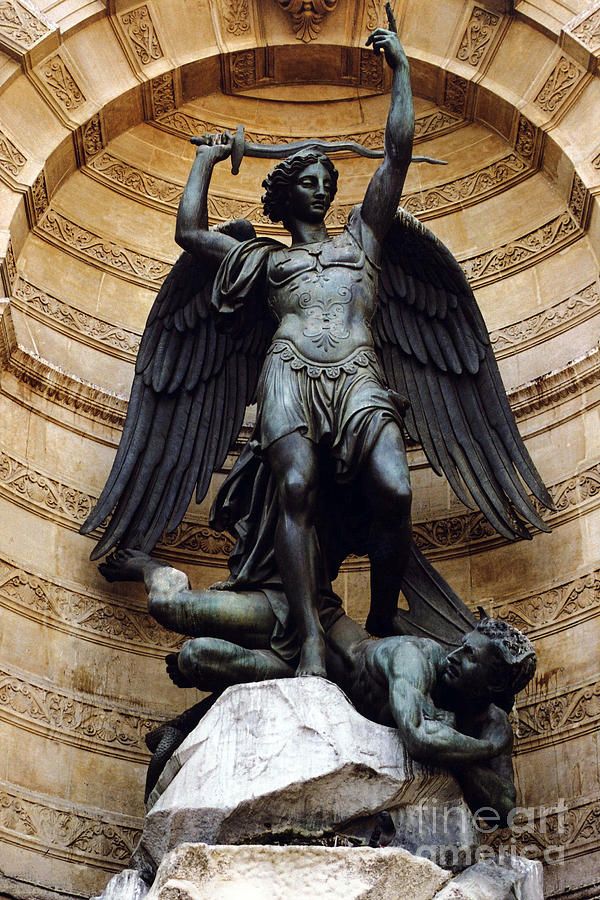 Image above “Michael, the archangel, with Satan under his feet,” on Pinterest.

A Psalm comes to mind when I think of the struggle we have today to determine what/who is right and who/what is wrong—Psalm 73.

1 Truly God is good to Israel, to those who are pure in heart. 2 But as for me, my feet had almost stumbled, my steps had nearly slipped. 3 For I was envious of the arrogant when I saw the prosperity of the wicked.

Sometimes it appears as if evil is always rewarded and God’s people are the ones suffering. Note Psalm 73:16-7—

16 But when I thought how to understand this, it seemed to me a wearisome task,
17 until I went into the sanctuary of God; then I discerned their end.

No problem can be faithfully understood until we enter into God’s presence and spread the problem before Him. Our sanctuary today is any place where we can be alone with God and have His Word opened before us. All we need is to utter a prayer for understanding. Psalm 73 says—18 Truly you set them [i.e. “the wicked”] in slippery places; you make them fall to ruin. 19 How they are destroyed in a moment, swept away utterly by terrors!

The wicked may prosper, but God sees to it they slip and end up destroyed. “The wicked have at no time any sure hold on their prosperity. They are a ‘set in slippery places’—places from which they may easily slip and fall.” [See Spence, below.]

We may be in ignorance as to why things happen to us, but God knows our destiny. I Timothy 6:15-16—15 He who is the blessed and only Sovereign, the King of kings and Lord of lords, 16 who alone has immortality, who dwells in unapproachable light, whom no one has ever seen or can see. To him be honor and eternal dominion. Amen.

Let’s not forget that God possesses full knowledge of all things! The light by which God manifests His presence in heaven is “created as a theophany.” Since God is spirit, no one can see Him. John Calvin says this about “light unapproachable”—

He means two things, that God is concealed from us, and yet that the cause of obscurity is not in himself, as if be were hidden in darkness, but in ourselves, who, on account of the dullness of our understanding, cannot approach to his light. We must understand that the light of God is unapproachable, if any one endeavor to approach to it in his own strength; for, if God did not open up the entrance to us by his grace, the prophet would not say, “They who draw near to him are enlightened” Psalm 34:5. [see Calvin below.)

The first three verses of Malachi teach us—

In the end, God will leave no doubt as to what/who is right and who/what is wrong. He will repay the wicked for their sins against Him and His people; and He will recompense the righteous for their sufferings.

I. The purification of God’s fiery judgment will consume the wicked and any memory of what they have done. vs. 1

4:1 “For behold, the day is coming, burning like an oven, when all the arrogant and all evildoers will be stubble. The day that is coming shall set them ablaze, says the Lord of hosts, so that it will leave them neither root nor branch.

3:2 But who can endure the day of his coming, and who can stand when he appears? For he is like a refiner’s fire and like fullers’ soap. 3 He will sit as a refiner and purifier of silver, and he will purify the sons of Levi and refine them like gold and silver, and they will bring offerings in righteousness to the Lord. 18 Then once more you shall see the distinction between the righteous and the wicked, between one who serves God and one who does not serve him. [ESV]

“The day of judgment will be to the ungodly like a burning furnace. ‘A fire burns more fiercely in a furnace than in the open air (Hengstenberg).’ The ungodly will then resemble the stubble which the fire consumes (cf. Isaiah 5:24; Zephaniah 1:18; Obadiah 1:18, etc.). [see Keil & Delitzsch, below.]

Verse 4:1 is very meaningful to believers as they suffer and the wicked seem to prosper. It states [the fire] “will leave them [the wicked] neither root nor branch.” A sonnet comes to mind—in the filmclip, an actor reads the sonnet. You can read along by reading the text blow it.

I met a traveler from an antique land,
Who said—“Two vast and trunkless legs of stone
Stand in the desert… . Near them, on the sand,
Half sunk a shattered visage lies, whose frown,
And wrinkled lip, and sneer of cold command,
Tell that its sculptor well those passions read
Which yet survive, stamped on these lifeless things,
The hand that mocked them, and the heart that fed;
And on the pedestal, these words appear:
My name is Ozymandias, King of Kings;
Look on my Works, ye Mighty, and despair!
Nothing beside remains. Round the decay
Of that colossal Wreck, boundless and bare
The lone and level sands stretch far away.” [See Ozymandias Sonnet, below).

“Ozymandias is one form of the name of the Egyptian pharaoh Ramesses II in Ancient Greek. This form of the name was commonly used in English sources written prior to the twentieth century. The poem is about the ephemeral nature of human power. The idea behind the poem is that this “Ozymandias” was once a great monarch who ruled a mighty empire. He built this Colossus in the desert and gave it this inscription, but now he is long dead, his cities are long gone, his statue is in ruins, and he has been totally forgotten.” [See Ozymandias, below.]

Eventually the desert sands will cover everything, and there will be no remembrance of the empire the proud monarch left. The same is true of the mighty who are trying to erase Christianity from societies in the West. They look triumphant now, but will be quickly forgotten on earth as Ozymandias’s buildings, towers, and statues of his day were.

Spence, H. D. M. ed. (1909). Exposition of the Psalms by G. Rawlinson in The Pulpit Commentary. Accessed 8 December 2021 from https://biblehub.com/commentaries/pulpit/psalms/73.htm