Image above is from Steve Law, 7 September 2018, Patterns of Evidence blog. It shows the Israelites worship of the gold calf while Moses was on the Mount receiving the Ten Commandments.

An anonymous author says, “Reverence is the very first element of religion; it cannot but be felt by everyone who has right views of the divine greatness and holiness, and of his own character in the sight of God.” (See Reverence, below.) Whenever a society as a whole deviates from the Word of God as the only rule of faith and practice, idolatrous living, ensues. Idols are not necessarily carvings or pictures. Idols can be mental as well as metal. See Isaiah 44:9-20. See Calvin quotation below.

Definition of a “Public Square”

“A public square” is any place that a story can be shared: a newspaper, magazine, book, website, blog, song, broadcast station or channel, street corner, theater, conference, government body and more. The American origins lie in the colonial village square and the first [printing] presses, which published the pamphlets and newspapers that advocated the birth of a new nation. (See Haack, below.)

(Picture above left “The Colonists Under Liberty Tree,” from Cassell’s Illustrated History of England, Volume 5, page 109 (1865); Public Domain from Wikipedia.)

[In modern public discourse,] the problems and dilemmas of society, e.g., issues like the economy, education, technology, judicial reform or immigration should be discussed and solved without any reference to the Divine. The Divine can be mentioned if the discussion is about one’s personal, private life, but not as an essential part of finding a solution to pressing national or regional questions. (See Haack, below; emphasis mine.) People who say they believe in God, yet live like the ungodly, are practical-atheists.

What can believers do if the larger society in which they live becomes Anti-God? Today people who mention God or the Bible aren’t permitted a place at the table of discussion. The anti-God want a piece of the financial pie.

Malachi 3:16 gives us a remedy, lest we become isolated and feel like we alone.

Malachi 3:16 gives God’s people a strategy for living in an age that does neither acknowledge God nor live by His Word as the only rule of faith and practice.

I. We can gather in smaller groups to encourage one another to remain firm in our own faith. vs. 16a

vs. 16a Then those who feared the Lord spoke with one another.

Moses at the Burning Bush illustrates the Fear of the Lord (from Pinterest). He removed his shoes from his feet as a sign of reverence.

We ought to pay attention to what the ungodly say in verses 13-15. By the way the word for “spoke to one another” is the same in 3:13—”But you say, ‘How have we spoken against you?’” By saying—

1. Serving God doesn’t pay for us in this life.
2. We mourn over sin, but the sinners are the happy ones.
3. Evil people sin with impunity, yet they escape punishment.

The Fear of the Lord

Servile or abject fear is not to be understood [fear of punishment], but filial fear [fear of marring the relationship], by which we fear to offend God. The expression describes that reverential attitude or holy fear which man, when his heart is set aright, observes towards God. (See Proverbs 1:7, below.)

Speaking to each other words that encourage includes positive words about who God really is and what will happen at the final judgment. We should remind each other that reward in this life in not final. God will reward His faithful servants in eternity!

God settles all His accounts, but not necessarily in this life

The editor printed his letter and simply added one sentence: “God does not settle all of His accounts in October.”

It might seem as if the ungodly and the wicked prosper and grow, and that all goes well for them—even if they thumb their noses at God and directly defy His commandments.

We can trust God to make all wrongs right. We can wait upon Him to bring justice to His children. All accounts will be settled, whether it is in this life or the next. Indeed, He does not settle accounts in October.

16 The Lord paid attention and heard them… .

II. We can encourage each other’s faithfulness by reminding each other God hears everything we say, especially prayers. 16b. 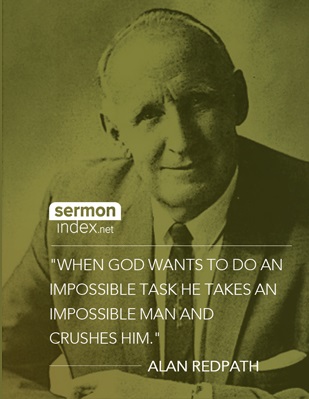 I once heard the late Alan Redpath speak in the late ’60s at the Ben Lippen Conference in Asheville, NC. We could eat supper in Greenville, SC and make it to the evening meeting at Ben Lippen in time (especially if the driver had a heavy foot on the accelerator). Redpath related the story of his problems in Chicago 1953-1962 as pastor of Moody Memorial Church in the sermon at Ben Lippen that night. (I used two written accounts to refresh my memory.)

At one of Alan Redpath’s lowest moments, Tozer phoned him and invited Redpath, who had been so successful in Great Britain and would be successful again after he left Chicago, to meet him on a beach along Lake Michigan for prayer. Tozer regularly prayed (April to October) on the lake front, between 5 a.m. and 8 a.m. Redpath said he didn’t go often, but when he did go, there was the Lord’s servant on his face waiting before the Lord, and it was holy ground. (See Biser, below.)

It was early in the morning, at daybreak, when Redpath arrived [one day]. Tozer was face down in the sand crying out to God in prayer and worshiping him. He was oblivious to all else. Redpath said the way that he prayed for him that morning helped turn his life around and put him back on a right course. He would face the failure of his Chicago ministry with renewed power and the aid of the Holy Spirit.

Moody Church had had a couple of short pastorates since Harry Ironside, pastor from 1929-1948, had left. It was obvious to Redpath that the leaders compared every new pastor to Ironside. A.W. Tozer himself was disliked by a wide array of evangelicals in the Chicago area, and beyond, and thus he often missed the ‘big opportunities’ that he might have enjoyed had he not been so outspoken.” Tozer was a good prayer partner for Redpath because of his experiences with criticism and discord.  (see Armstrong & Biser, below.)

We can and should minister to our fellow believers in the area in which we share the same hurt. II Corinthians 1—

3 Blessed be the God and Father of our Lord Jesus Christ, the Father of mercies and God of all comfort, 4 who comforts us in all our affliction, so that we may be able to comfort those who are in any affliction, with the comfort with which we ourselves are comforted by God. [ESV; emphasis mine.]

Has God permitted us to be hurt deeply? We will recognize hurt believers when we see and hear them. We should use the opportunity to minister out of our painful experiences.

16c and a book of remembrance was written before him of those who feared the Lord and esteemed his name.

III. We can encourage each other by realizing God remembers everything we do for Him. vs.16c

While the ungodly complain and distort the image of God, the godly can meet to counteract the errors of the ungodly. We can also connect God to our problems by praying together.

When I was a boy, people in my home church told me about cottage prayer meetings that always preceded the special meetings referred to as “revivals.” They realized a church cannot schedule revival, but it can prepare for it.

Prayer before special meetings was the norm before and after WWII, dying our only in the 1970s. These used to be called “cottage prayer meetings” and they were common in some parts of America in the first part of the 20th century. They were still common in the 1960s and 1970s. But they have gone by the wayside in most churches. Special meetings are not preceded by special prayer, and the result is a lack of spiritual power. We tend to depend more on advertising, enthusiasm, decorations, special music, and the dynamism of the speaker.

Pelham Baptist Church in South Carolina, was pastored by Harold B. Sightler from 1942 until 1952. Consider the following testimony about the power of prayer for revival and evangelism—

“In 1946 only three people were baptized at Pelham, and so in early 1947 a week of prayer meetings were held at night at the church, prayer only, for revival and salvation of souls, with no preaching or singing. People began to get saved, and the church grew. The prayer meetings continued, and by 1949 were being held on Sunday nights after church in a pasture. These often drew a hundred people and sometimes lasted until one o’clock in the morning. A rock altar was built around a tree. Each represented a person being prayed for by name” (James Sightler, “Observations on Dr. Harold B. Sightler’s Early Ministry and the Heritage of Tabernacle Baptist Church,” http://tabernacleministries.org/Church/ history.php4).

We can and should meet with like-minded believers who will pray and encourage us and other fellow-believers.

Power flows from the throne of God in answer to believing prayer!