We have now arrived at the one passage of Scripture that some persons use to interpret the entire book—the Millennium—the Latin word for 1,000. Some look to the daily news for fulfillment.

In former days, when we had brick and mortar stores in which to shop for religious books and if one were shopping for a commentary on revelation, one would thumb over to Chapter Twenty to see what the author’s view of the millennium. Then chapter four was perused to see what position the author takes on “the tribulation” and “the rapture of the church.”

If we place Revelation 20 into the context of the whole book, the chapter teaches—

God will judge the dragon, Satan, once for all at the Second Coming; faithful witnesses of Christ are ruling with Him in heaven during the age of the Church.

I. It is important to see the structure of the book as a whole—progressive parallelism—and in light of the meaning to the first century believers. 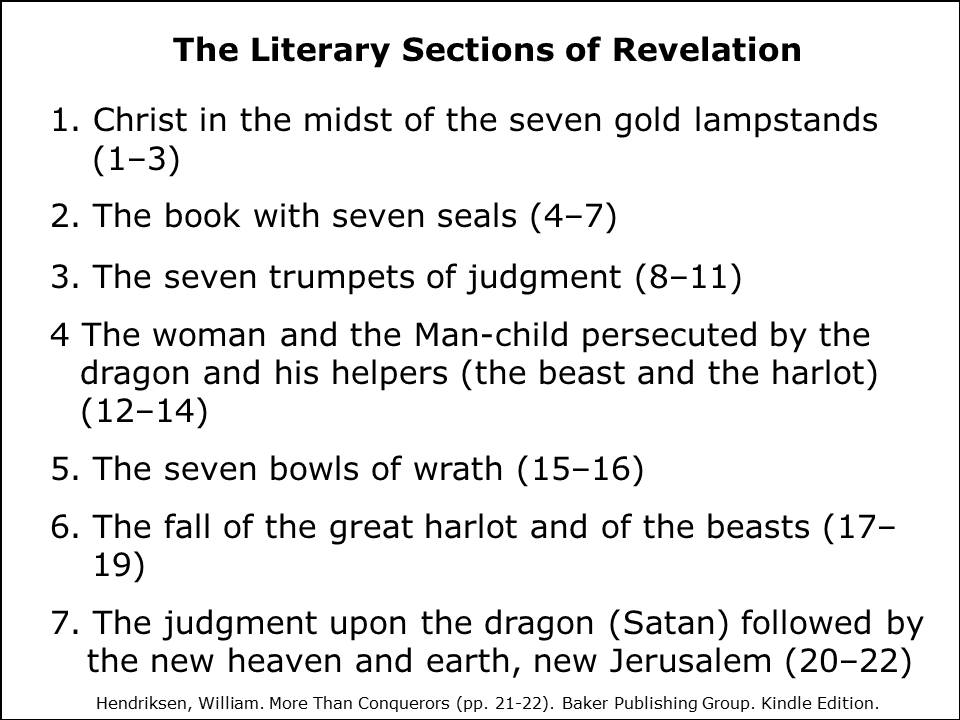 —”Revelation gave first-century Christians insight into the purposes of God in their time. We can at least conclude, therefore, that interpretations of the visions that lie completely beyond the original readers’ frame of reference are suspect.” (see Johnson, D. E., below.)

II. There are seven cycles of judgment, each ending with the Second Coming.

The cycles [of Revelation] parallel one another. All cover the same period leading up to the Second Coming. But each cycle does so from its own distinct vantage point. Moreover, later cycles concentrate more and more on the most intense phases of conflict and on the Second Coming itself. We have parallelism of the sections in Revelation, but it is a progressive parallelism—with later sections focusing more on the final judgment.  (see Poythress, below.)

It makes more sense to see 20:1-15 as the last cycle of judgments, out of a total of 7, beginning at Christ’s First Coming extending to Christ’s Second Coming. (see Poythress, below.)

Victorinus of Pettau wrote the oldest extant Latin commentary on Revelation. He interprets the book’s cycles as

recapitulations of the same time described above. (pictured right by Jakob Brollo.)

Those years wherein Satan is bound are in the first advent of Christ, even to the end of the age; and they are called a thousand, according to that mode of speaking, wherein a part is signified by the whole, just as is that passage, “the word which He commanded for a thousand generations,” although they are not a thousand. Moreover that he says, “and he cast him into the abyss,” and he shut him up, says he, and put a seal upon him, that he should not deceive the nations until the thousand years should be finished. (see Victorinus of Pettau, Rev. 20:1-3, below.)

St. Augustine of Hippo says the thousand years began with the formation and mission of the New Testament Church.

“Now the devil was thus bound not only when the Church began to be more and more widely extended among the nations beyond Judea, but is now and shall be bound till the end of the world, when he is to be loosed. But while the devil is bound, the saints reign with Christ during the same thousand years, understood in the same way, that is, of the time of His first coming.” (see Augustine of Hippo, below.)

The enemies of Christ’s Church are presented in the order in which John sees them in his vision (along with images of God’s people interspersed throughout). Revelation does not give visions in chronological order that people on earth will experience them.

I trust it is obvious that I hold to the  so-called “Amillennial view” of Revelation 20. I prefer “realized Millennium,” as Dr. Jay Adams has called it. We believe in a millennium (in heaven, not on the earth).

Next time we will move into the exposition of the Twentieth chapter.

Notes
(Commentaries on which I rely sometimes without direct quotation)