Image above of the Hydra monster based on Revelation 17 by Gustave Moreau, 1876; public domain.

We in the Western World may look around and substitute the name of evil countries for “Rome.” The current trajectory of the West is toward globalism for economic and political purposes.

Babylon is a trans-historical reality that includes idolatrous kingdoms as diverse as Sodom, Gomorrah, Egypt, Babylon, Tyre, Nineveh, and Rome. Babylon is an eschatological symbol of satanic deception and power; it is a divine mystery that can never be wholly reducible to empirical earthly institutions (see Johnson, F. E. below, p. 736).

Above is a drawing (by me) of Alan Johnson’s view of the mountains as kingdoms of the past. I revised the view to fit to John’s Revelation since John is updating the Old Testament prophesies to his time and ours. Antiochus Epiphanes (in Greek Epiphanes refers to [god] “manifest”; Attiochus’s enemies referred to him as Epimanes (“the Insane One”). (see Antiochus Epiphanes,  below.) He was a Seleucid ruler who persecuted Israelites and tried to force them into conformity to Grecian beliefs and customs—Hellenization. He defiled the Temple in Jerusalem by having a pig sacrificed on the altar of sacrifice. He is an appropriate figure for a type of Antichrist  who will appear in the end as a manifestation of a global power seeking to destroy the church and  to rule humankind.

Coin front and back of Antiochus Epiphanes IV.
Image from https://www.biblicalarchaeology.org

The theme of Chapter 17 is that enticing evil lies behind all nations of this world. The Beast is a composite of empires some gone and some still are on the scene in today. The application of Revelation 17 is—

God will thoroughly destroy all religious-economic-political alliances
that seek to dominate people’s lives.

I. We must understand that everything new to us is in reality old from the standpoint of the Ancient of Days whom we serve. vss. 9-10

vss. 9-10 9 This calls for a mind with wisdom: the seven heads are seven mountains on which the woman is seated; 10 they are also seven kings, five of whom have fallen, one is, the other has not yet come, and when he does come he must remain only a little while. [ESV]

What is this mind with wisdom?—”[Our minds need] true wisdom to behold many incidents of the world’s history and not find stumbling-blocks in them (Psalm 73:2-3; Psalm 119:165).” (See Ellicott, below.)

Verse 9 has led to the identification of the woman as Rome. It was noted in the ancient world as the City of Seven Hills. Note the translation in the NIV—”hills.” The Greek word is horos—usually translated “mountain.” Note that the woman is said to sit on the mountains. They are said a little later on to be kings. John uses marvel (in Greek thaumazō) to describe the reaction of the “earth-dwellers.” They awestruck over the apparent rising again of the beast after his seeming defeat, that is seeming from their viewpoint. The current infatuation of the world with globalism and commerce is an example of what this verse is talking about. The people who are involved are described as “those whose names have not been written in the Book of Life from the foundation of the world.” Note the tense of the verb—perfect tense. It describes a past completed act with a present result. These people are not believers. They have deliberately chosen to follow the beast cult instead of Christ’s true religion.

Many commentators try to make this verse fit into the Roman emperors of John’s day. The numbers do not fit the text.

The Roman Emperors before and when the Apostle John lived

II. We must realize that all earthly confederations will fall and other nations will take their place. vss 11-12.

← Image to the left is of a 2 Euro Greece coin 2002-2006. I do not make the images in Revelation to be fulfilled in our day. I think it strange that the Greece chose an image from Revelation to be on its Greek coin.

vs. 11-12 11 As for the beast that was and is not, it is an eighth but it belongs to the seven, and it goes to destruction. 12 And the ten horns that you saw are ten kings who have not yet received royal power, but they are to receive authority as kings for one hour, together with the beast.

Evil seeming has endless lives. It is dealt with only to rise again some where else. The woman is said to sit on the mountains who are identified as kings in this verse. The kings are really kingdoms or empires. We see the handwriting on the wall, for all evil empires, just like Daniel saw.

This is the writing that was inscribed: “MENE, MENE, TEKEL, UPHARSIN” (v. 25). This is Daniel’s interpretation of the matter: MENE—God has numbered Belshazzar’s kingdom and brought it to an end; TEKEL—he has been weighed in the scales and found to be lacking; and PERES—his kingdom has been divided and given to the Medes and the Persians (vv. 26-28). [https://www.ministrysamples.org/excerpts/DANIELS-INTERPRETATION-OF-THE-WRITING-ON-THE-WALL.HTML]

One day all nations will be “numbered” and brought to an end; “rulers weighed and found to be lacking”; and “their country be given to another.” 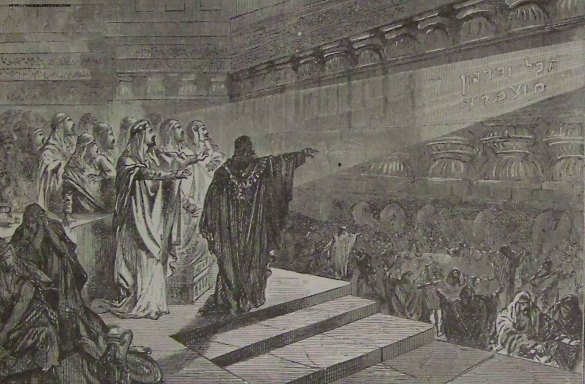 “Daniel Interpreting the Writing on the Wall” at Belshazzar’s feast;
illustration from the 1890 Holman Bible; from WikiMedia Commons public domain

This verse presents the interpreter with the greatest challenge. The series of 7 days followed by an 8th was familiar in the ancient world. The 8th day was the day of Christ’s resurrection. It was the symbol of the victory of Christ over the forces of evil. The coming up out of the abyss by the beast as an 8th head is an imitation of the resurrection of Christ. Christ defeated the 7 heads at Calvary, yet the 8th will rise again in the end times.

The numbers in this chapter are symbolic. Both 7 and 10 describe completeness and perfection to the ancient mind. Our interpretation should be qualitative in nature instead of quantitative. The 10 kings are simply a way of referring to a complete group of confederates that help the beast to establish his kingdom. They could be physical or spiritual in nature. However, it does not describe the European Common Market confederacy of today. Alan F. Johnson describes the 10 confederates of the beast as “none other than the principalities and powers, the rulers of the darkness of this world, the spiritual forces of evil in the heavenly realms that Paul describes as the true enemies of Jesus’ followers (Ephesians 6:12). To be sure, they use earthly instruments, but their reality is far greater than any specific historical manifestations.” (see Johnson A. F., p. 161, below) It seems that the 10 confederates are earthly instruments of the spiritual forces operating behind the scenes.

III. We must realize when a government perverts God’s laws and authority, it becomes evil.

vss. 13-14 13 These are of one mind, and they hand over their power and authority to the beast. They will make war on the Lamb, and the Lamb will conquer them, for He is Lord of lords and King of kings, and those with him are called and chosen and faithful.”

Charles Foster etching “Offering to Molech” 1897. The little children were burned to death in offerings to the god Molech. This man in the picture is just going to put a little child in the idol’s arms. Other men are blowing on trumpets and beating on drums, and making a great noise, so that no one can hear the poor little child cry. WikiMedia Commons public domain image

The members, whether physical or spiritual, will give the beast their resources in order to build the Beast’s kingdom. Molech was  referred to as the “god of child sacrifice” by some. This deity was thought to be very well pleased with offerings that burned living people, notably children, in a fire. People sacrifice their children for promises of a better life.

Just like the beast has cohorts, the Lamb has his followers. They are: “called” (klētos), “chosen” (eklektos) and “faithful” (pistos) The beast has a bloodthirsty crew with him. The Lord has a faithful group of followers who follow him to death and back to life and who share his reign. What a contrast! The Lamb is referred to as kurios kurion—Lord of Lords. Caesar’s title was kurios—Lord. He also was referred to as basileus—king. These titles are the Lord Jesus Christ’s by divine right. He will manifest this fully at his Second Coming.

IV. We must realize that the more the beast seeks to rule over people, the more chaos breaks out. (vss. 15-17).

vs. 15-18 And the angel said to me, “The waters that you saw, where the prostitute is seated, are peoples and multitudes and nations and languages. 16 And the ten horns that you saw, they and the beast will hate the prostitute. They will make her desolate and naked, and devour her flesh and burn her up with fire, 17 for God has put it into their hearts to carry out his purpose by being of one mind and handing over their royal power to the beast, until the words of God are fulfilled. 18 And the woman that you saw is the great city that has dominion over the kings of the earth.

Here, as pointed out in verse 1, is the explanation of the image of sitting on the waters. Here is an allusion to the fact that there will be chaos in the nations at the end. The Antichrist will weld the competing nations into a unified whole. There will be great persecution of the Lord’s people. After his purpose is accomplished, the alliance will break up and the members will destroy their own confederation (compare Ezekiel 16:36-40.)

The Greek literally says “God placed it in their hearts to do one purpose.. .and to give their kingdom to the beast.” God is always in charge of all events on this earth. He never allows things to get out from his control. It may appear to us that things have gone awry, but they are underneath God’s sovereign control. He permits the alliance to hold until his purposes have been fulfilled. Then, things come apart. Jeremiah 10:25 says, “Pour but your wrath on the nations… . For they have devoured Jacob; they have devoured him completely and destroyed his homeland.”

This is not Rome of John’s day only. Babylon is too broad a symbol to only refer to Rome. It is rather a symbol of the world system in opposition to God in all ages that has passed from the scene only to morph and reappear. Caird says, “The ravaging of the whore by the monster and its horns is John’s most vivid symbol for the self-destroying power of evil.”

This we will see fully carried out in Chapter 18 next time!