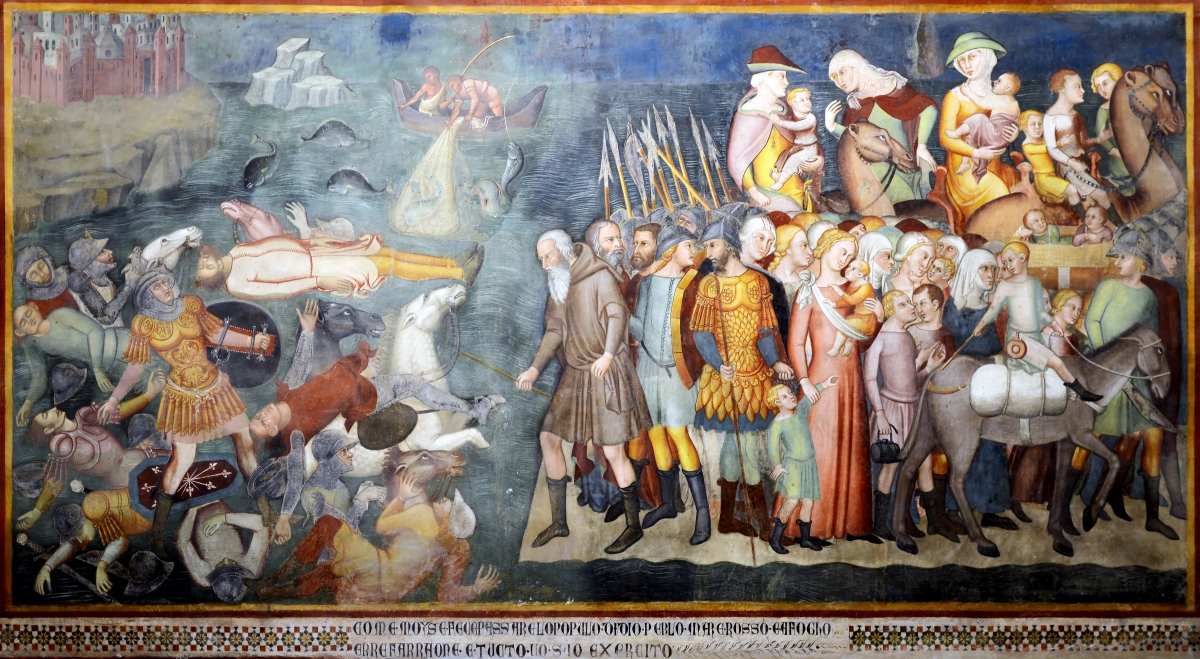 The image above “The army of Pharaoh are drowned in the Red Sea” in Duomo, San Gimignano,” photograph  by Livio andronico 2013; Licensed under CC-BY-SA-4.0

The Broader Context of Chapter 15—

Looking back: In chapter 7 the 144,000 is symbolic of the people of God who were sealed before the judgment began. This is the period of the “last days”—the days of Christ’s Death, Resurrection, and Ascension; and continuing through Christ’s Second Coming. In chapters 8-10 God visits the earth with warning judgments. Chapters 11-13 are interludes giving the church the reasons why she suffers so much at the hands of sinful men. Chapter 14 is an index to the final judgment.

The Context of Chapter 15 —

Chapter 15 is an interpretive interlude to chapter 16. The first section of the chapter (vs. 2-4) deals with the victors over the beast who have been caught up to be with the Lord. The second section (vs. 5-8) deals with the seven angels bearing the bowls of judgment. “Chapter 15 is tied closely to chapter 16. Both deal with the seven last plagues of God’s wrath. One is preparatory and interpretive, the other descriptive.” (See Johnson, A. F. below)

The application of chapter 15 to our lives is —

We can look back at our suffering and persecution in the past as permitted by the loving providence of an all-wise God; and then, we can look forward in hope to the time when all things unjust will be set to right by that same all-wise God.

I am reminded of Rudyard Kipling’s poem, which I memorized and delivered it in Freshman Speech. We must be reminded constantly anti-Christian empires always fall. Like the Titanic, thought at the time to be an unsinkable ship when launched, all earthly empires will eventually fall. “Recessional” By Rudyard Kipling, 1897 on the occasion of the diamond jubilee of Queen Victoria. He strikes a warning in the midst of the celebration of the British public. Video is of a reading 1:48. The words are printed below. 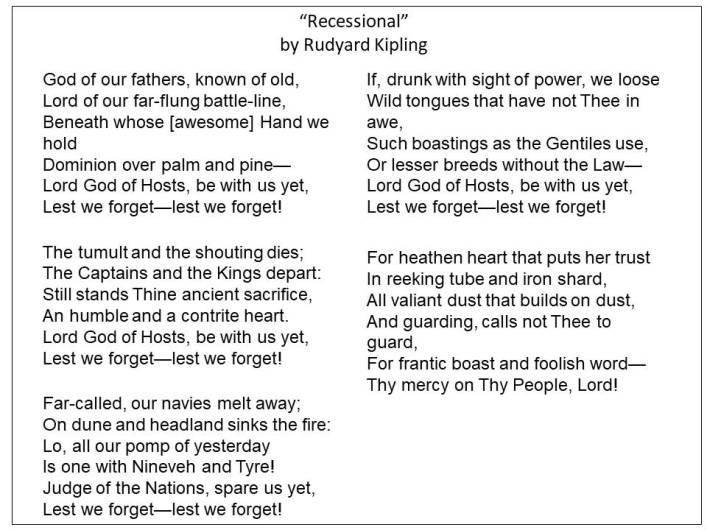 This Chapter reminds us not to place faith in empires and armies. God alone can keep us from our enemies!

I. The Seven plagues will bring an end to persecuting powers throughout the entire age of the Church.

vs. 1 Then I saw another sign in heaven, great and amazing, seven angels with seven plagues, which are the last, for with them the wrath of God is finished. [ESV; emphasis mine]

By calling it “another” great sign John connects it with the vision of the heavenly woman and the dragon who wars against her and her child 12:1, 3 (see Johnson, D. E. below). This verse is a introductory verse to both chapters 15 and 16. There are two other “signs (sēmeion) in the heavens” in this part of the book (12-22). They are in 12:1, 3—(1) the woman clothed with the sun; and (2) the dragon. The word “another” is in Greek “another of the same kind.” 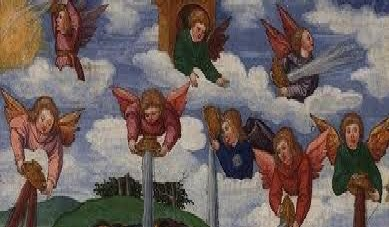 The Giving of the Seven Bowls of Wrath
The First Six Plagues, Matthias Gerung, c. 1531

Two stories are illustrative as I think about God’s judgment throughout the age of the church.

An umpire named Babe Pinelli once called Babe Ruth out on strikes. When the crowd booed with sharp disapproval at the call, the legendary Ruth turned to the umpire with disdain and said, “There’s 40,000 people here who know that the last pitch was a ball, tomato head.” Suspecting that the umpire would erupt with anger, the coaches and players braced themselves for Ruth’s ejection. However, the cool headed Pinelli replied, “Maybe so, Babe, but mine is the only opinion that counts.” (Lou Nicholes – Author/Missionary).

God’s Word gives us warning about trusting in our or society’s thinking instead of what God has declared to be true. His truth alone is what matters!

Just before the death of actor W. C. Fields, a friend visited Fields’ hospital room and was surprised to find him thumbing through a Bible. Asked what he was doing with a Bible, Fields replied, “I’m looking for loopholes.” (Source Unknown).

Once our life is drawing to a close, we must realize there are no loopholes in God’s Word. We ought to live each day as if it were our last. Luther once said, “There are only two days on my calendar—today and that day!”

II. The Seven plagues will bring an end to all persecuting armies and nations at the very end.

The bowls will be also the seven last plagues because with them God’s wrath is then completed. The Greek reads, “Seven angels having seven plagues, the last ones, because in them the wrath of God was completed.” The “because”  gives explanation of the reason for the emphasis upon these plagues as “the last ones.” The phrase “in them” indicates “by means of these last seven plagues God’s wrath is brought to completion.” The past tense is used because the event is so certain that it can be placed in the past tense. The passive voice indicates an implied divine agency in the event.

One of the first gospel illustrations that ever made a real impression upon Harry Ironside’s young heart which he heard a preacher tell when he was less than nine years old.

It was of pioneers who were making their way across one of the central states to a distant place that had been opened up for homesteading. They traveled in covered wagons drawn by oxen, and progress was necessarily slow. One day they were horrified to note a long line of smoke in the west, stretching for miles across the prairie, and soon it was evident that the dried grass was burning fiercely and coming toward them rapidly. They had crossed a river the day before but it would be impossible to go back to that before the flames would be upon them. One man only seemed to have understanding as to what could be done. He gave the command to set fire to the grass behind them. Then when a space was burned over, the whole company moved back upon it.

As the flames roared on toward them from the west, a little girl cried out in terror, “Are you sure we shall not all be burned up?” The leader replied, “My child, the flames cannot reach us here, for we are standing where the fire has already been!”

The fires of God’s judgment burned themselves out on Christ, and all who are in Christ are safe forever, for they are now standing where the fire has already burned. (H. A. Ironside, Illustrations of Bible Truth, Moody Press, 1945, pp. 34-35).

This last set of plagues do describe events throughout the age of the Church when empires fall. They also telescope us to the last judgment when all powers opposed to Christ will be vanquished from the battlefield! 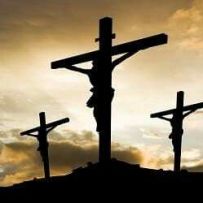 The only safe place in that Day is to be found believing in Jesus Christ as our Lord and Savior!

I Corinthians 16:22 If any man love not the Lord Jesus Christ, let him be Anathema*; Maranatha!‡

* Anathema = in Greek “to be accursed” or “dedicated to destruction.”
‡ Maranatha! = “Our Lord, come!” in Aramaic

Notes (Commentaries on which I rely sometimes without direct quotation)