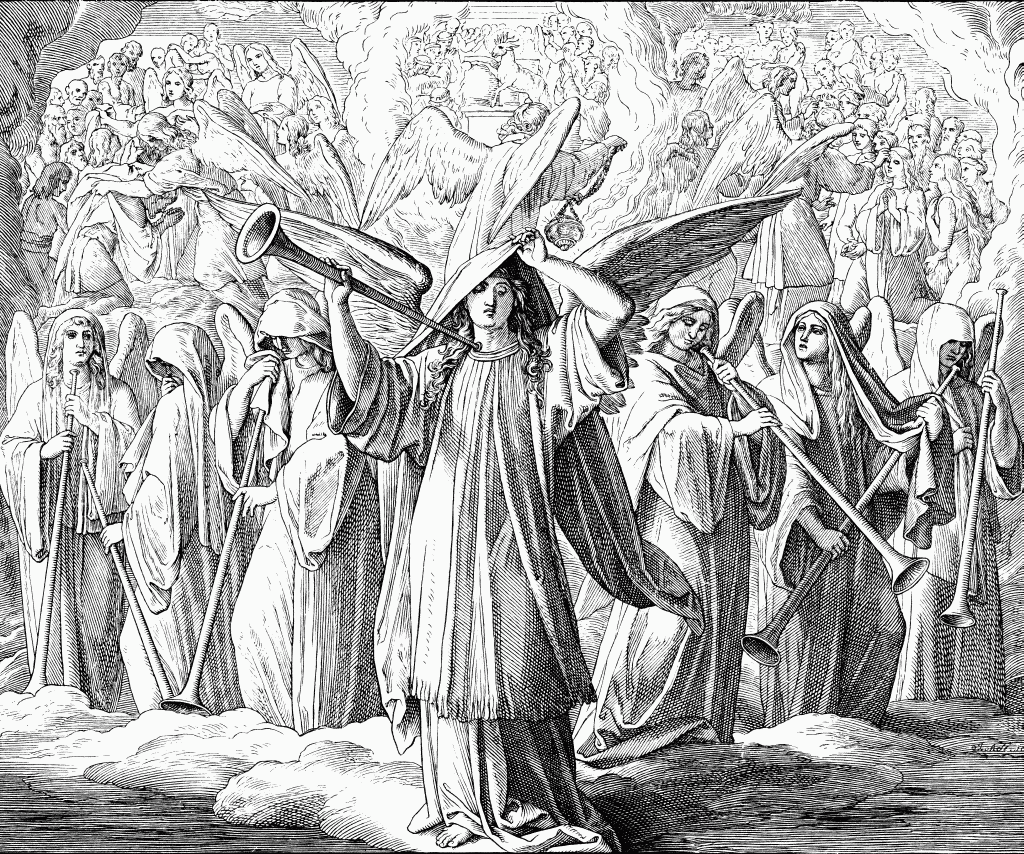 The image above is “144,000 with Trumpets, 1860 woodcut by Julius Schnorr von Karolsfeld” from WikiMedia Commons

In Revelation 14-15 we are taken to a new set of visions that recapitulate the age from the resurrection/ascension of our Lord to His Second Coming. Only now, the focus is more one the very end of the age. We have adopted the viewpoint of progressive parallelism. Each new set of visions traverse the same ground, but with each we focus more on the end.

I remember a story from Our Daily Bread devotional I read in the past. A son from the congregation had returned as a fresh seminary graduate. He was asked to preach for his home church on the next Sunday. The church was crowded and, though no one noticed, the custodian slipped in at the back and sat to listen to the “lad” he had seen grow up. The newly minted graduate wanted to impress his church, so he preached on the Book of Revelation. He asked the congregation what the message of the book was. After an uncomfortable silence of a minute, the old custodian said aloud, “We done won!”

That is the message of the book of Revelation in a nutshell! We must think and act like victors, not pose  victims! We have already won even though the battlefield is still being cleared of enemy combatants who are beaten but not yet vanquished from the field. As we begin this new section I see a truth we need at this very hour!

We must not allow current events in space and time to rob us of the fact that Christ, and we in Him, have already triumphed.

Let’s see what comfort God gives to his people by assuring them of His victory over all Satan’s forces!

I. God can and does bring His people through all persecution and suffering.

vs. 1 Then I looked, and behold, on Mount Zion stood the Lamb, and with him 144,000 who had his name and his Father’s name written on their foreheads.

This 144,000 is the same group which was sealed in chapter 7 before the persecution began. Here in chapter 14, the same group is viewed after they have safely passed through persecution. Alan F. Johnson points out, “A glance back at chapter 7 reminds us that there the 144,000 were merely sealed; here, however, they are seen as already delivered.” (see A. F. Johnson, below).

They have not lost one of their number sealed before the persecutions began. The group is the entire Church viewed from the standpoint of an exact number. God knows those who are his. He makes sure that they pass through any and all tribulations in this life without being lost. Developing nations today are keenly aware that God brings His people though tribulation. He does not exempt them from persecution. See World Watch Map below. 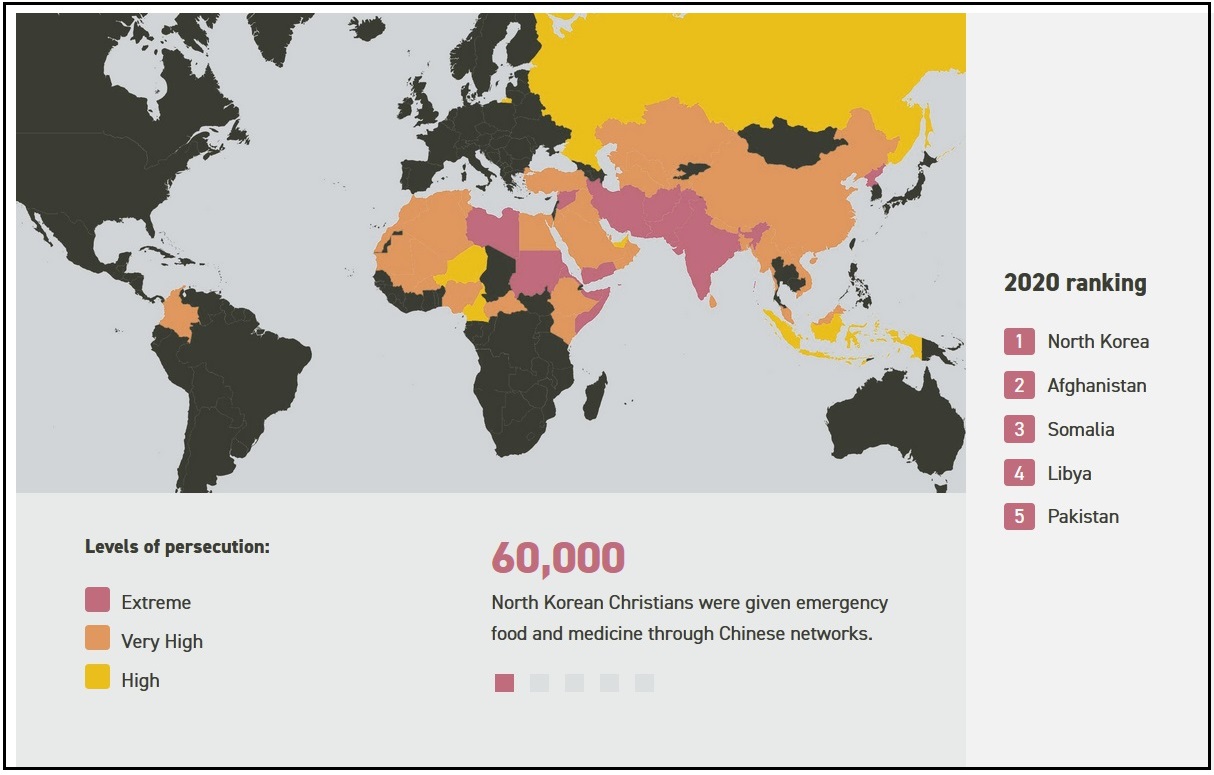 Persecution map of the church in the world-over.
Open Doors UK found at https://www.opendoorsuk.org/

Mount Zion is a reference to the dwelling place of God. Three interpretations of this symbol have been offered—

(1) the literal hills around the Jerusalem area
(2) in the prophetic tradition of the Old Testament, Mount Zion became a symbol of the place where the Messiah would gather to himself the great company of the redeemed
(3) it may simply be a figurative way of saying that the saints are secure in the Lord

It seems to me that a combination of 2 & 3 is best. The Lord will gather his people to himself, both all along during this age, and at the end. The saints have been resurrected just prior to the pouring out of the wrath of God and are safe with Him. He is poised to return in glory and execute his judgment.

They have the seal of ownership marking them as God’s property. This is in contrast to the mark of the beast in chapter 13. It is this seal which guarantees the protection of the saints while they are in this world. 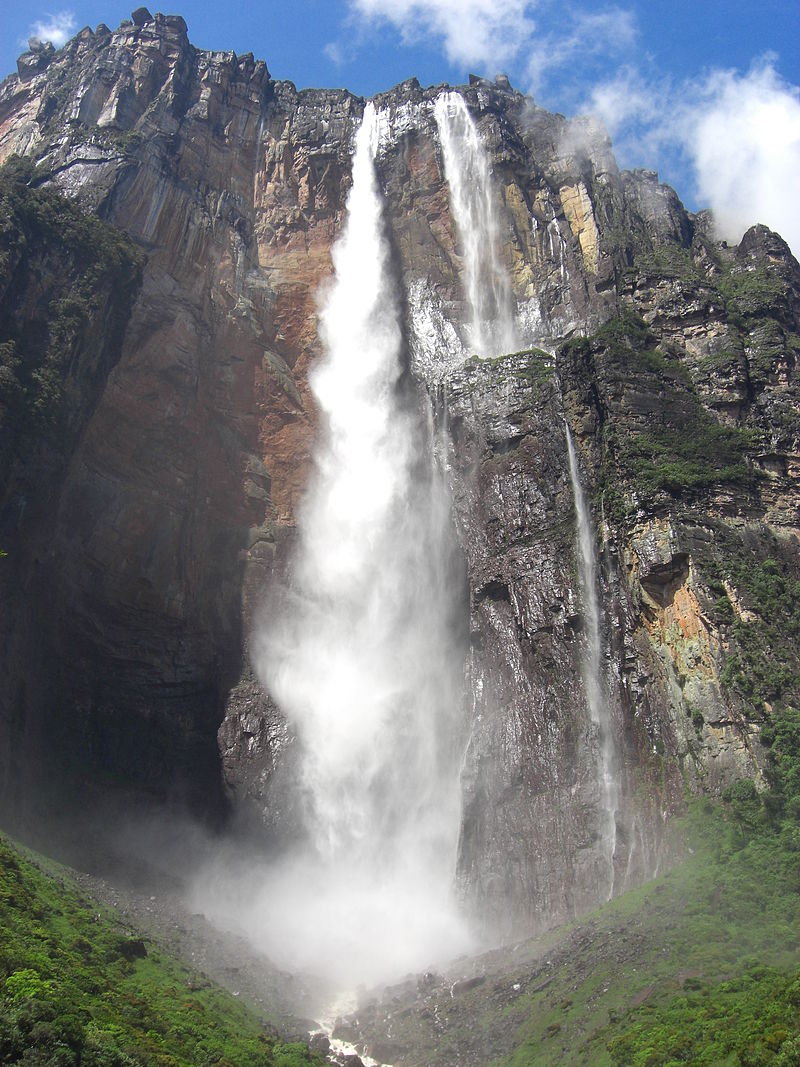 Picture of Angel Falls in Venezuela the world’s tallest waterfall at 3,212 ft.
Wikipedia image by Diego Delso licensed under CC BY 3.0

II. While final judgment is being executed, the saints in heaven sing the high and holy praises of God.

If you have ever stood at the base of a great waterfall, you know how overwhelming the sound is. If the praise of heaven will drown out all clamor below on earth, why not drown it out now down here in praise to the Triune God!

I have always had three pictures in the various studies at churches I have served—(1) Charles H. Spurgeon; (2) G. Campbell Morgan; and (3) D. Martyn Lloyd-Jones. “Doctor,” as Lloyd-Jones was known, was a physician who left his practice to preach the Gospel. He was pastor at Westminster Chapel, Buckingham Gate in London (1939-1968). His sermons were recorded live and the person recording taped the song before the sermon. Now, Doctor was not a musician, but the singing of that congregation is electric. Listen to a recording of “The Strife Is Over, the Battle Done.” The Doctor is exuberant if not in tune all the time (1:47).

That congregation was made up of 1500 persons in 1961 when this recording was made. I believe overpowering congregational singing is a little taste of heaven.

The sound I heard was like that of harpists playing their harps. The harp is the first century equipment that aids those in this vision to praise God. Compare Rev. 5:8. The song comes from the 144,000 gathered safely in heaven. The angelic choirs in heaven have to sit this one out. They are in a learning mode since they have not been redeemed. See I Peter 1—

10 Concerning this salvation, the prophets who prophesied about the grace that was to be yours searched and inquired carefully, 11 inquiring what person or time the Spirit of Christ in them was indicating when he predicted the sufferings of Christ and the subsequent glories. 12 It was revealed to them that they were serving not themselves but you, in the things that have now been announced to you through those who preached the good news to you by the Holy Spirit sent from heaven, things into which angels long to look.

I read the section above in one church I served. I said, half jesting half serious, “Just think of the empty seats as occupied by the angels who are longing to learn of redemption.” At the door as I greeted the worshipers after the service, one elderly man replied, “It’s a shame we can’t pass the collection plate to the angels.”

I had intended the comment for the comfort of people who realized the church was small but fulfilled a greater purpose in God’s plan.  Ephesians 3 gives us more insight into the church’s ministry to angels.

8 To me, though I am the very least of all the saints, this grace was given, to preach to the Gentiles the unsearchable riches of Christ, 9 and to bring to light for everyone what is the plan of the mystery hidden for ages in God, who created all things, 10 so that through the church the manifold wisdom of God might now be made known to the rulers and authorities in the heavenly places [reference to the angels].

III. Though we may live in a sinful world now, a time will come when we and where we live will be pure.

The picture is of the Church as the Bride of Christ as a chaste and pure Bride. It means that they have not been defiled by the whore of Babylon who is to be presented in chapter 17. The marriage is to happen in chapter 19. The bride of Christ comes to that marriage pure and undefiled. In the Old Testament adultery is a symbol of idolatry. 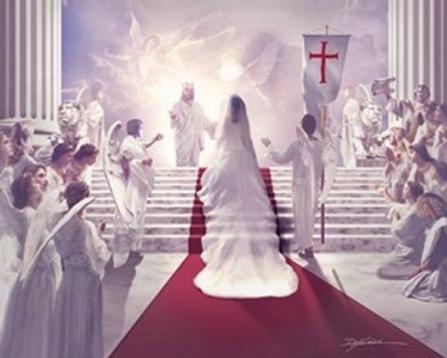 Christ’s bride follows the Lamb and not the beast. This is a reference to the discipleship of the Lord’s people.
They were purchased from among men and offered as firstfruits to God and the Lamb. The firstfruits were wholly dedicated to God. They were offered as an offering to him and could not be put to secular use (cf. James 1:18).

No lie was found in their mouths means complete truthfulness is the mark of Christ’s followers. This may be a reference to their refusing to take blasphemous statements of the beast cult on their lips. ”Blameless” (amomos) is used of sacrificial victims to indicate their acceptableness to God. This could also indicate that Christian service is sacrificial.