Image above is from Wikimedia Commons by Ki Sigit Ariyanto Dalang Wayang Kulit CC BY-SA 4.0. “Shadow play,” also known as shadow puppetry, is an ancient form of storytelling and entertainment which uses flat articulated cut-out figures (shadow puppets) which are held between a source of light and a translucent screen or scrim.

Government without God is shadow-play. Secular humanism, which most Western liberal churches believe, is false religion!

The triple alliance between Satan (Dragon), the state (Beast from the Sea), and false religion (Beast from the Land) results in opposition God and persecution of His people.

I have stated before in this blog that apocalyptic images were familiar to the first century church, like “political cartoons” are to us in the Twenty-First Century. “A political cartoon, a type of editorial cartoon, is a graphic with caricatures of public figures, expressing the artist’s opinion.” (see Wikipedia, Political Cartoon below.) 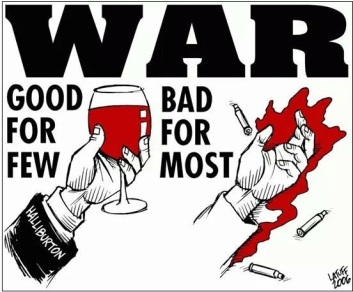 Example from the Second Gulf War. “War 2” by Carlos Latuff.
2006 from Wikimedia Commons

We who were adults in the Second Gulf War era, realize this cartoon says private oil firms make the money while military and non-combatants spill their blood.

“Between the logistics giant Halliburton and a myriad of armed security companies, private military contractors comprise the second largest “force” in Iraq, far outnumbering all non-U.S. forces combined. There are as many as 100,000 civilian contractors and approximately 20,000 private security forces.” (see Fontline Report, 2005, below.)

Private security can operate off the grid and without the “bothersome” constraints of law.

The Horrors of War, During and After

Our soldiers are noble and do what any administration asks them to do. They often return damaged and troubled. After they serve, they are often ignored and shelved in VA facilities.

Many eventually die and are forgotten by the nation that asked them to give “their last full measure of devotion.” The motivation of the soldiers going into battle is often very different from the motives of the government which sends them to fight.

I like the theme song for HBO’s “Band of Brothers” — “Requiem for a Soldier.” I listened often to that song as my sons were sent to fight in the wake of the 911 terrorist attack (both graduated from military colleges).

You never lived to see
What you gave to me
One shining dream of hope and love
Life and liberty
With a host of brave unknown soldiers
For your company you will live forever
Here in our memory.

In fields of sacrifice
Heroes paid the price
Young men who died for old men’s wars
Gone to paradise
We are all one great band of brothers
And one day you’ll see we can live together
When all the world is free.

I wish you’d lived to see
All you gave to me
Your shining dream of hope and love
Life and liberty
We are all one great band of brothers
And one day you’ll see – we can live together
When all the world is free.

Note the third line in the middle verse — “young men who died for old men’s wars.” “Older men declare war, but it is the youth that must fight and die.” — Herbert Hoover

PTSD is the reason many soldiers commit suicide after they return stateside. One question de-briefers ask is, “Did you see a person in your unit die?” Really! “How many did you see die?” would be a fairer question. Many die in their comrades arms as they try to save their lives.

If you want to know what the ground war was like in Afghanistan, see the documentary film “Restrepo” by National Geographic (click on this blue link and see a clip from the film; the entire film (1hr. 29mins.) is also available on YouTube). “In May 2007, the men of Second Platoon, Battle Company began a 15-month deployment in the Korengal Valley of eastern Afghanistan. It was considered one of the most dangerous postings in the U.S. Military.” 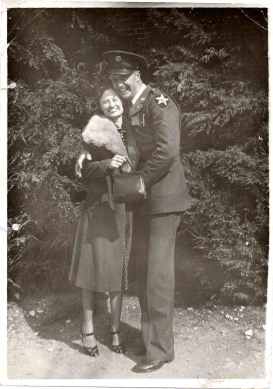 Image above is of Marvin Joe “Red” Blankenship, my maternal grandfather, in Fayetteville, NC, at his wedding in 1939 to Faye Williams (not my grandmother, but a sweet lady. Faye always made the best Apple hand pies for breakfast when we visited them in Spindale, NC.)

I once asked my maternal Grandfather, Marvin Joe “Red” Blankenship, what war was like. We always called him “Red.”

He replied, “I was a machine gunner on a tank at the Battle of the Bulge. The German infantry was mostly 16-17 year old boys. We mowed them down as fast as they came toward us, firing until the machine guns turned orange from heat and would fire no more until cooled. I still see the faces of those young boys in my dreams at least once a week.” I never asked him again.

My mother said she asked him the same question once. He told her a similar story—his unit sneaked into a German camp on recon and slit the throats of boys while they slept. She never asked him again.

He served on past WWII and retired from the army after 30+ years. One day when he could take it no more, he went to his bed for his afternoon nap and put a bullet through his head. He was a causality of war even though he lived beyond the conflict. Like many veterans in wars he had smoked (“smoke ’em if got ’em) and used alcohol to cope. He had quit both before I knew him, but the damage had been done. His wife Faye had been a strong Christian influence on his life! He told Faye he couldn’t go through another winter with COPD and pneumonia. I believe I will see him again in heaven!

PTSD is a living hell! One with it relives the battles over and over again as long as they live. A PTSD incident can be triggered by a sound, a smell, or a place.

Secular Humanism is the West’s Religion

Ironically, [Secular Humanism’s] faith has led to what has been called “perpetual war for perpetual peace.” To demand the unity of all men is the essence of total imperialism [or New World Order for global unity]. The result is total warfare.

The peace lovers are history’s greatest warmongers. Worldwide interventionism to effect world peace has characterized the policies of late of the U.S.S.R., the U.S., the U.N., and others. …Man without God ends up as man without man, unable and unwilling to live at peace with anyone, and unable to live at peace with himself. …Hell then is logically “other people” [according to Sartre], and the humanistic faith in man as his own god becomes history’s major impulse towards suicide. The Satanic temptation (Genesis 3:5 “you will be like God, knowing good and evil.”) thus becomes the counsel of death to men and nations. (See Death of an Age, emphasis mine, below).

Where we Get Hope

Our only hope is to acknowledge the Ancient of Days and His Law. See Daniel 7:9-18.

I wrote this post on Veterans Day 2020. I honor our soldiers! However, I do not support the concept of “my country, right or wrong.” The Church of Jesus Christ should speak truth to power and be the conscience of the nation.

By the way, when I was drafted in 1972, I went for induction along with 178 others from Greenville, SC. They took two guys only. (I suspected something was in the works to end the war in Vietnam.) I did not have to serve, but I would have done what my country asked of me without question. Our soldiers make that same commitment even before they set foot on a battlefield, and we at home sleep undisturbed each night.

Section 60 is a small part of a much larger story. It’s a piece of Arlington Cemetery, roughly 14 acres out of 624. It’s most notable as the place where many of the people killed in Iraq and Afghanistan are buried. It has been called “The saddest acre in America.”

We honor the soldiers even if we disagree with our government’s foreign policy at times.

Excuse me for writing so much personal material about war. However, I am trying to show where the State allied to a false, civil religion operates—i.e. secular humanism. We as Christians cannot endorse courses of action that are contrary to the Word of God. We need to speak out. The church needs to address issues instead of endorsing or opposing candidates in elections. The stand on issues spoken loudly enough can deal with the candidates.

Death of an Age. (2013). Faith for all of Life May issue. Accessed 5 November 2020 from https://chalcedon.edu/resources/articles/the-death-of-an-age-and-its-faith

Liberty Under God and Its Alternative. (2005). Accessed 5 November from https://chalcedon.edu/resources/articles/liberty-under-god-and-its-alternative