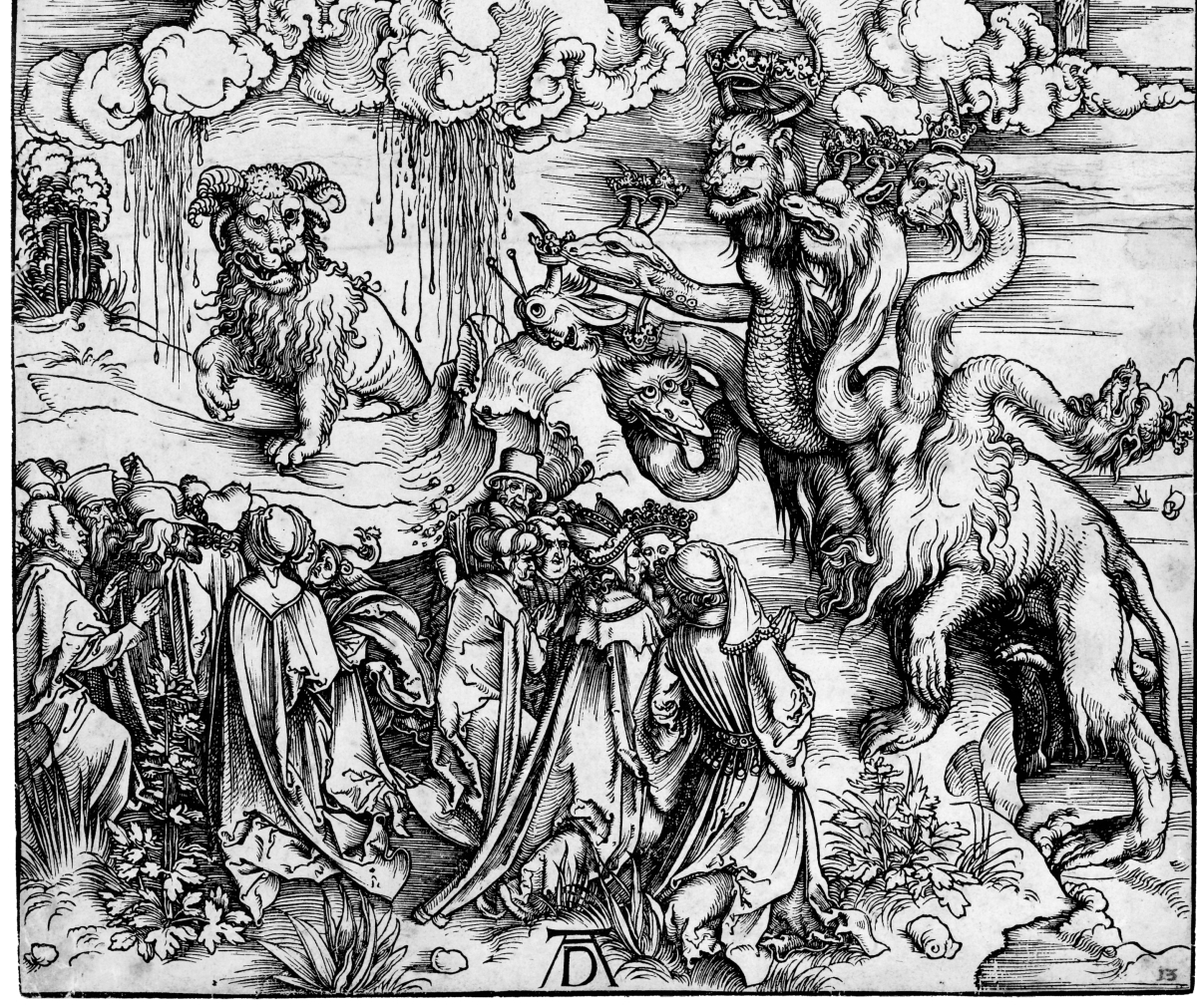 Image above: The Revelation of St John: 12. The Sea Monster and the Beast with the Lamb’s Horn. A woodcut by Albrecht Dürer. Wikipedia; public domain.

Chapter 13 spells out in no uncertain terms that Christians are marked people as we worship and serve Jesus as Lord and not the Caesars of our day.

The Link Between Chapters 11-13 — The visions of all three chapters are linked by reference to the persecution of the church. In chapter 11, the church is faithfully witnessing during tribulation between the First and Second Advents while the godless masses carry out persecution against her members. In chapter 12, the dragon who persecutes the woman and her seed, is seen to be the cause behind all of the persecution of the church. At the end of chapter 12, the dragon takes his stand on the sea shore to watch as his cohorts begin to do his bidding, as seen in chapter 13.

“This chapter forms part of the theme of the persecution of God’s people that John began to develop in ch. 12. Turning from the inner dynamics of the struggle, ch. 13 shifts to the actual earthly instruments of this assault—the two dragon-energized beasts.” (see Johnson, A. F. p. 701, below.) 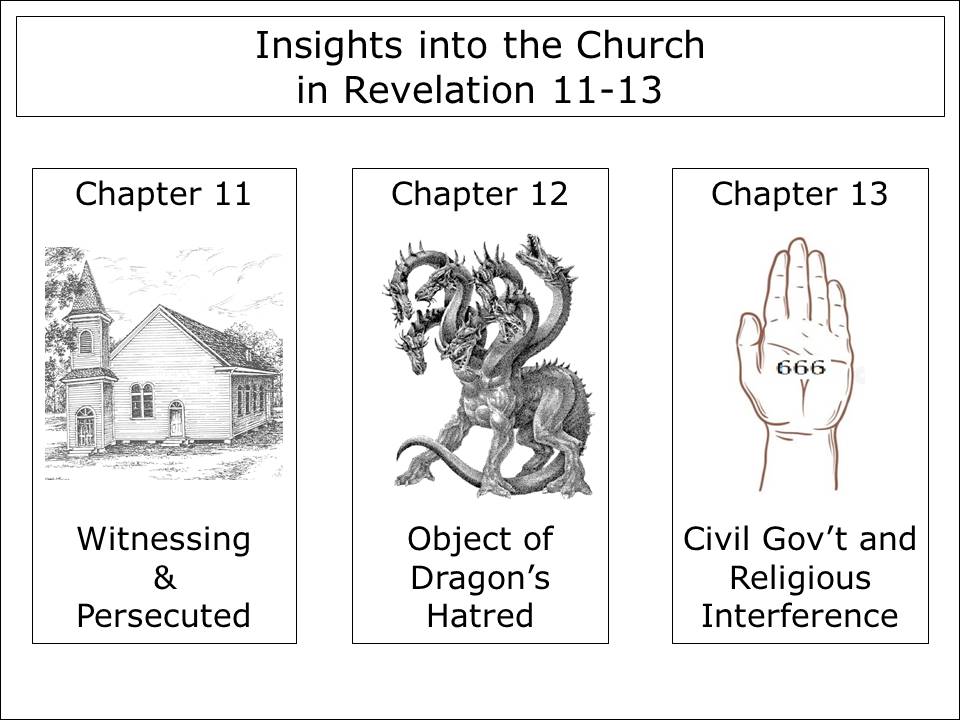 From the Chart above one can see Chapter 13 uses a marked hand to indicate forces attempting to influence work. I do not believe these are to be taken as literal marks (e.g. microchips under the skin or a bar code on the arm, etc. as popular prophecy books claim).

In the courts of England in the past they used to brand mark a person’s thumb on the underside with a letter to indicate his crime. This way no one would do business with a criminal after he was released. He would turn his palm up to shake hands and all would know instantly what he had done. I will speak more about the “666 image” later. Perhaps it is better to see the mark as invisible but detectable by one’s outward loyalties. Such is the mark of baptism upon a believer!

The Identification of the Two Beasts of Charter 13 — The two wild beasts are the Dragon’s minions. They perform his bidding, receive his authority, and provide him with followers from humanity. They also persecute those who will not follow the dragon his program.

These three — 1. the Dragon; 2. the Beast from the Sea; 3. the Beast from the Land — form the satanic trifecta of evil. They cannot form a genuine Trinity because they do not share the same substance like the Godhead does. But, they are attempting to pass themselves off as an ersatz “Trinity.” Together, they are bent on the destruction of God’s plans and opposition to God.

vs. 1 [And the Dragon stood on the shore of the sea.] And I saw a beast rising out of the sea, with ten horns and seven heads, with ten diadems on its horns and blasphemous names on its heads.

I. When governments do not recognize King Jesus as Lord of Lords, they become like wild beasts in their treatment of non-conforming people.

“Beast,” in Greek, is thērion — meaning “wild beast.” This is a designation

for evil, demonic forces behind human governments. It is taken from the book of Daniel (7:4-6) . In Nebuchadnezzar’s dream, he envisioned his  government as a golden statue.

In God’s estimation, human governments under the influence of demonic forces are wild beasts. Government is
supposed to support right and punish wrong, but often it does the opposite. Satan’s two earthly instruments are viewed by God as wild beasts ready to devour mankind.

1 Let every person be subject to the governing authorities. For there is no authority except from God, and those that exist have been instituted by God.
2 Therefore whoever resists the authorities resists what God has appointed, and those who resist will incur judgment.
3 For rulers are not a terror to good conduct, but to bad. Would you have no fear of the one who is in authority? Then do what is good, and you will receive his approval,
4 for he is God’s servant for your good. But if you do wrong, be afraid, for he does not bear the sword in vain. For he is the servant of God, an avenger who carries out God’s wrath on the wrongdoer.
5 Therefore one must be in subjection, not only to avoid God’s wrath but also for the sake of conscience.
6 For because of this you also pay taxes, for the authorities are ministers of God, attending to this very thing.
7 Pay to all what is owed to them: taxes to whom taxes are owed, revenue to whom revenue is owed, respect to whom respect is owed, honor to whom honor is owed. (ESV) 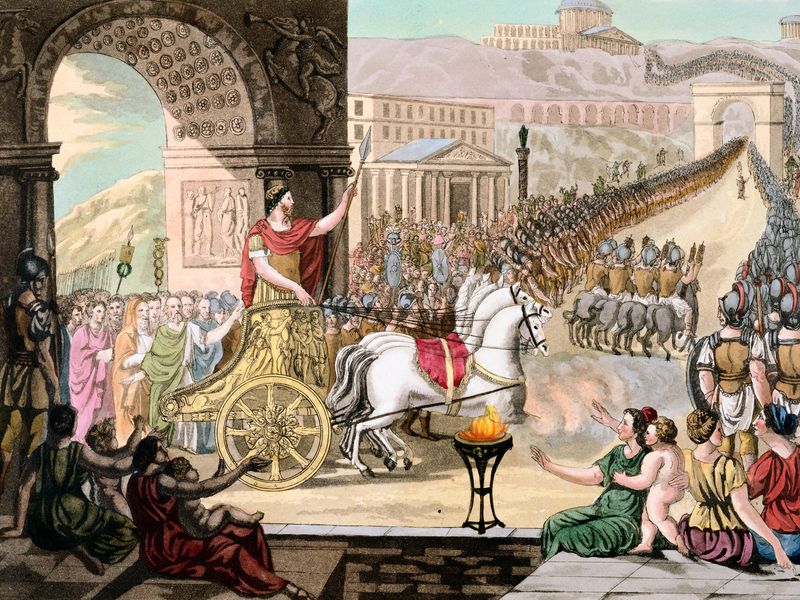 Think of the annual visit of a Roman governor to his province (pictured above). He would be given a procession from the harbor in Ephesus to the Praetorium—the Roman governor’s residence—high above the theater that seated 25,000 persons. (The high vantage point said to Ephesians, “Beware! Rome’s eye is on you!”)

The imperial cult was not merely a matter of stone temples, lifeless statues, and voiceless inscriptions passively waiting to be noticed. Priests and celebrants regularly brought these sites and their ideology to life, following a calendar of imperial celebrations, including the monthly commemoration of the reigning emperor’s birthday. As the procession passed by, householders would sacrifice on small altars outside their homes [note the altar in the picture above]. The whole city thus had opportunity to join in the celebration. (see DeSilva, pg. 42, below).

II. When Christians refuse to render homage to State as god, we are treated badly by our neighbors for non-conformity.

The problem is not giving respect to our government officials. We owe them that according to Romans 13 and Jesus’ words to His disciples. We as believers are caught in a quandary sometimes. Jesus has an answer—Mark 12:15-17 —

Our quandary comes when “our Caesar” usurps what belongs to God and requires us to obey it. We cannot render unto Caesar the things that belong to God! 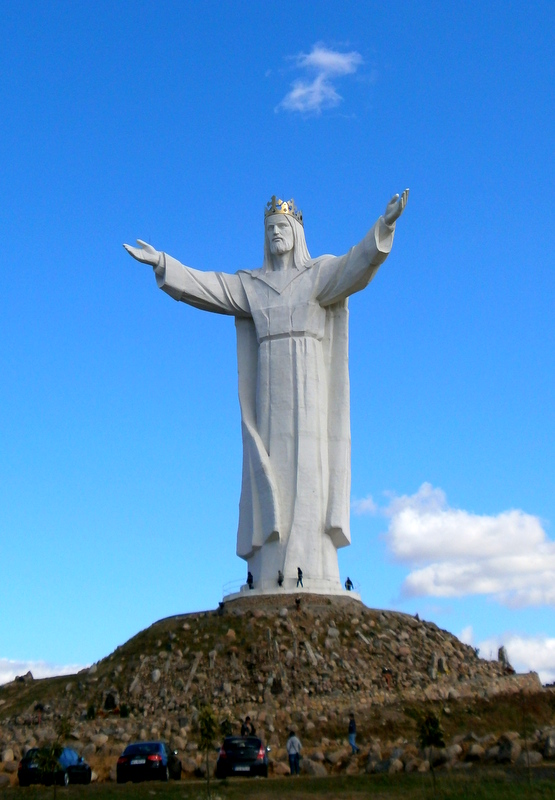 III. Our obedience to and honoring of God has priority over our yielding to man’s wishes.

The Imagery of the Sea — In Rev. 11:7, the beast is said to arise “out of the abyss” (also in 17:8) . This indicates that the sea, here in 13:1, is a symbol for the abyss, in 11:7. “The ancient [Israelites] de-mythologized the sea-monster myths to depict the victory of the Lord of Israel over the demonic forces of evil that in various manifestations had sought to destroy the people of God.” (see Alan F. Johnson, 1987 ed. p. 524, below.)

Note Isaiah 57 about Israel and the wicked nations around her —

18 I have seen [Israel’s] ways, but I will heal him; I will lead him and restore comfort to him and his mourners,
19 creating the fruit of the lips. Peace, peace, to the far and to the near,” says the Lord, “and I will heal him.
20 But the wicked are like the tossing sea; for it cannot be quiet, and its waters toss up mire and dirt.
21 There is no peace,” says my God, “for the wicked.” (ESV; emphasis mine)

I leave you with two quotations —

“He who marries the spirit of the times will soon find himself a widower.” — G. K. Chesterton

“What, then, is it for a man to serve his own generation? I note, first, that it is not to be a slave to it. It is not to drop into the habits, customs, and ideas of the generation in which we live. What is it, [then]? It is to maintain true religion. — ( see Spurgeon, below)

We move on to more in the 13th Chapter next time.