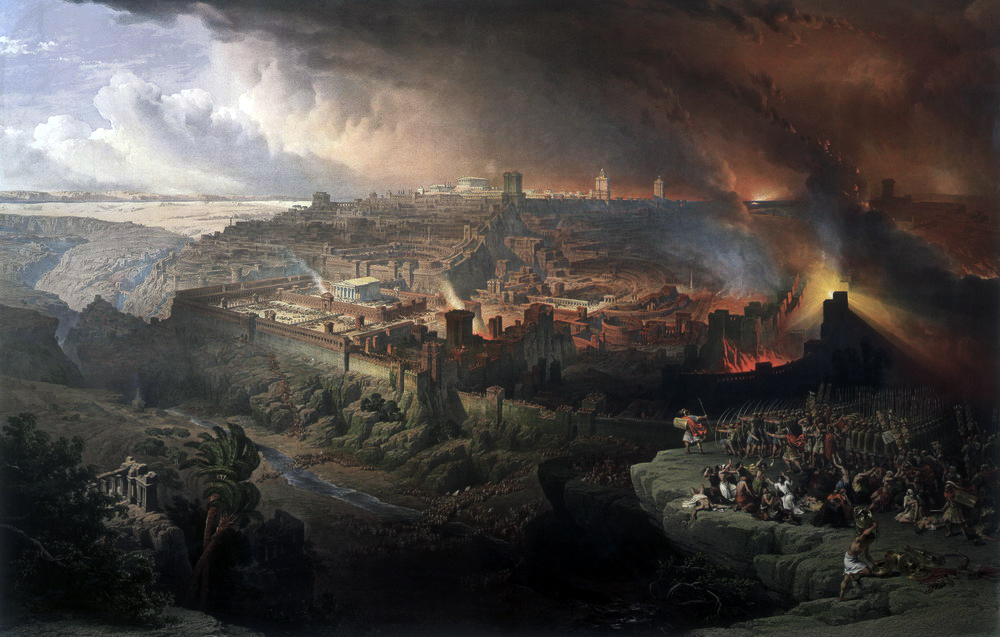 Image above is “The Siege and Destruction of Jerusalem by the Romans Under the Command of Titus, A.D. 70,” by David Roberts (1850), shows the city burning (Wikipedia) 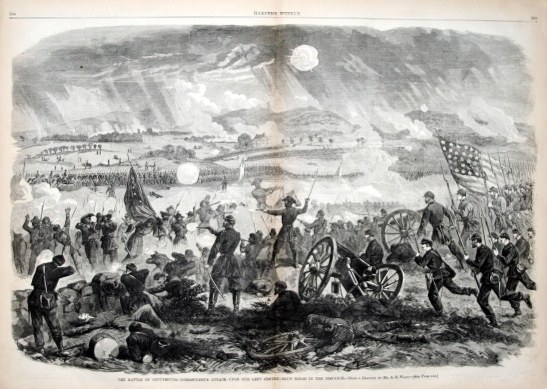 I. We should pay attention to disasters as God’s warning of impending judgment.

vs. 12 The judgment on Light Sources — The Greek word for “stricken” is plessô. The noun form is plêgê from which we derive our English word plague. This is a judgment on the light reaching earth from heavenly bodies. This plague is reminiscent of the ninth plague (Ex. 10:21) in Egypt. Darkness always tends to frighten men. Any disturbance in the heavens should point out a warning to sinners. The effects of this plague is the lessening of the earth’s light. It does not mean that the days are shortened from 24 hrs. to 16 hrs., as some commentators hold. It simply means that only 2/3 of the normal light reaches the earth.

Darkness in day time is generally the effect of siege during war. As enemies burn the surrounding crops, day seems as night. (see Johnson, D. E., below).

“At the opening of the sixth seal John saw the sun blackened, the moon turned blood-red, and the stars fallen to earth like figs (Rev. 6:12-13); yet now he sees sun, moon, and stars still shining in the sky and then struck with only a partial dimming.” (see Johnson, D. E., below).

The quotation above underscores the conviction that the various judgments in Revelation are recapitulation of preceding judgments with an increasing focus on the end — also known as progressive parallelism.

On May 19, 1780 in Connecticut, at 9 a.m., the legislature was in session, trying to work through the maze of problems caused by “the horrors of an unnatural war,” as clerk Strong put it, when the sky began to darken. Within an hour, he wrote, it “occasioned a solemn gloom of unusual darkness.” In the lower house, work stopped as nervous legislators went to the windows to watch and wonder. It got darker still, and by 11 a.m. it was impossible to read or recognize another person’s features, even when they stood near the legislative chamber’s windows. Panic set in—both in the town and in the general assembly. Fearing that the day of divine Judgment—the Biblically prophesied moment when God would come to “judge the living and the dead” ­– had actually arrived, the lower house hastily adjourned, legislators groping their way through the darkness toward home.

Judge Abraham Davenport of Stamford called his fellows to their civic duty, even in the face of impending doom. “The day of judgment is coming or it is not,” Davenport told his fellow councilors. “If it is not, there is no occasion for alarm. If it is, I wish to be found in the line of my duty. I move therefore, that candles be brought.” See Normen, below).

Cause of the Darkness and the Meaning

The incident with darkness during the daytime in 1780 was caused by forest fires, thick fog, and cloud cover. (see New England’s Dark Day below.)

II. We as Christians should proclaim Christ’s Gospel during times of disaster.

This story gives us a Christian response to the moral darkness around us today. Maybe this is a sign of the Day of Judgment. It certainly is a herald of judgment on us as Western society for our manifold sins and corruption of other nations around the world. As believers, we ought to be about our duty! We have the Gospel message and it is still “the power of God unto salvation to everyone that believes (Romans 1:16-17).”

If it is not the final judgment that is upon us, let us all be about our duty of preaching the Gospel, which is always a proper response to any disaster.

13 Then I looked, and I heard an eagle crying with a loud voice as it flew directly overhead, “Woe, woe, woe to those who dwell on the earth, at the blasts of the other trumpets that the three angels are about to blow!”

III. We as Christians ought to warn the unrepentant of worse judgments to come if they do not turn to Christ.

The phrase “those who dwell on the earth” is a technical term in Revelation for those who are opposed to God and to his people (3:10; 6:10; 8:13; 11:10; 13:8; 17:2) . That there will be severe judgments to follow the indirect ones speaks of the fact that God will not always be patient with unrepentant man. However, there is a limit to God’s longsuffering and forbearance. May God give us grace to respond to him when he speaks or acts.

Trumpets warn of impending judgment, but the final judgment will come in God’s time.

“St. Augustine’s Last Public Prayer” always stirs me not to give up in perilous times.

And it chanced at one time while we were seated with him at the table and were conversing together that he said to us: “I would have you know that in this time of our misfortune I ask this of God: either that He may be pleased to free this city which is surrounded by the foe, or if something else seems good in His sight, that He make His servants brave for enduring His will, or at least that He may take me from this world unto Himself.” (see Possidius, Chapter 29; below).

Next time application of the first four trumpets!

Notes (Sources of this study)