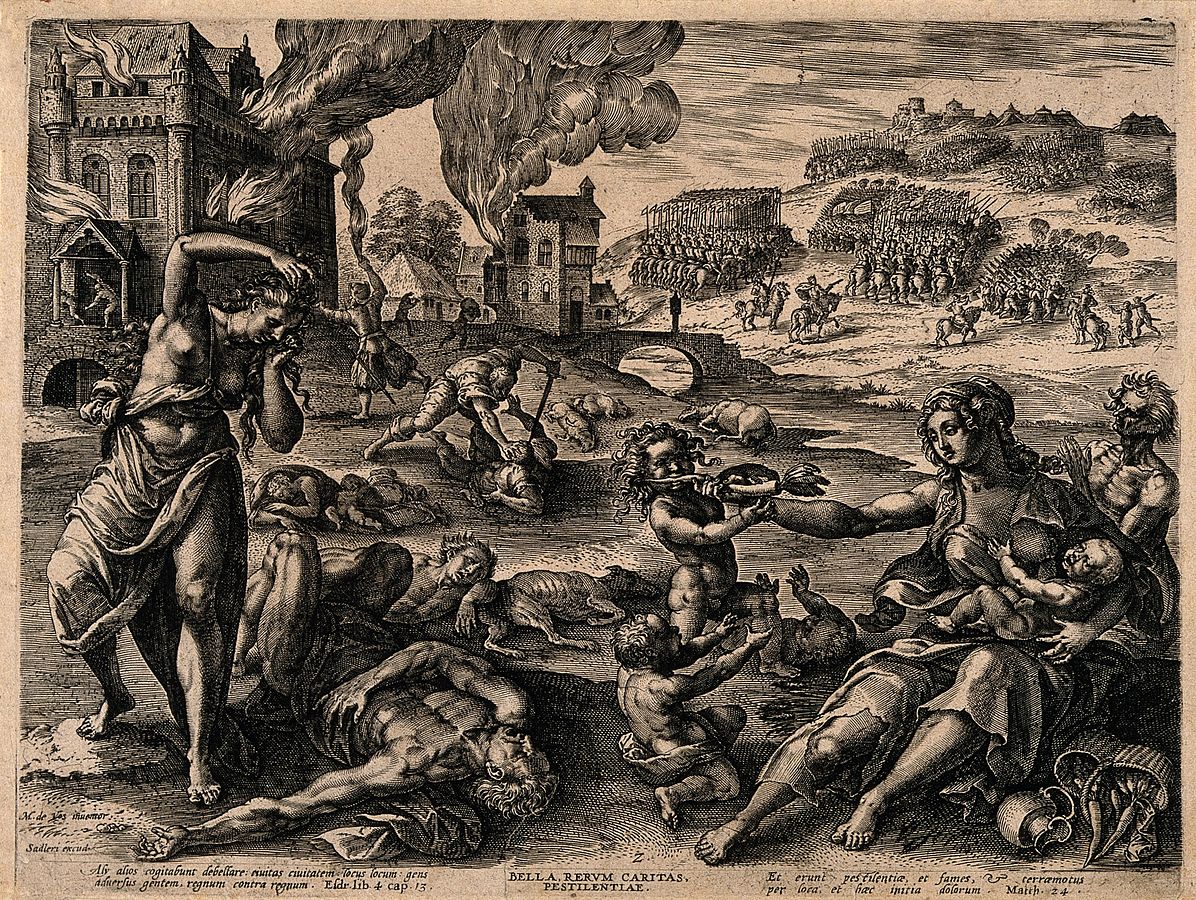 6:5 When he opened the third seal, I heard the third living creature say, “[Go]!” And I looked, and behold, a black horse! And its rider had a pair of scales in his hand.

Image “Plague, war and famine” by Sadler above from WikiMedia Commons.

As Conquest leads the way in the Four Horsemen of the Apocalypse, War follows, and now Economic Hardship. High prices for food that is in short supply always follows war.

I. The Black Rider’s Equipment

The Third Rider’s equipment is a scales (zygos = a balance beam scale; word also translated “yoke”.) which indicates something to do with the economy of the day.

Beale says, “In the ancient world, a pair of scales stood for a time of [severe economic hardship], as in such times food was rationed out by scales” (see Beale, p. 128, below).

Very careful measurement is required due to scarcity and high price of food. This clarifies the myth of the Pax Romana (Roman Peace). Rome promised prosperity and peace for all. Yet it delivered it only to the elites of society. (see Keener, below).

The source of the voice is not given. The text says the the voice came from the vicinity of (en mesos) the four living creatures. It is obviously a divine decree from Christ himself.  (see Beale, p. 128, below). Christ’s decree limits Caesar then and it still limits governments in modern times!

II. This is the picture of food scarcity and high inflation due to economic hardships following war.

A denarius was the amount paid to a man for one day’s work. A choinix was a measure that was close to a quart. A quart of wheat was the amount one man consumed in one day.

Barley is inferior, and a man would usually feed this to his animals or to his slaves. However, if he could only buy a quart of wheat, he could not feed his family from it. If he wanted to feed his family, he would have to buy the barley. This was less nutritious and would lead to malnutrition. 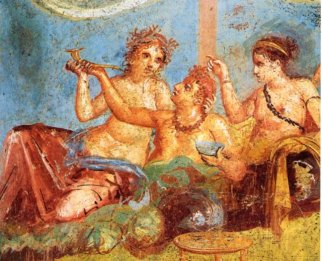 “John elaborates on the inevitable outcome of Rome’s greed and exploitation, expressed here with especially poignant imagery: a pair of scales” (see Fee, p. 94, below). God is bringing punishment upon Rome for persecuting His church. Economic hardship reduces the amount of grain (in the far reaches of the Empire) that could be harvested and shipped back to Rome.

Most of the land owning elites in the colonies (i.e. Asia Minor) made the most money by selling oil and wine to the elites of Rome. However, Rome was in need of grain to feed its masses—the hoi polloi—to keep down rebellion.

The Emperor Domitian in A.D. 92 ordered half of the vineyards in Asia Minor to be cut 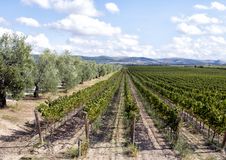 down and the ground sown with wheat. Rome needed to keep its masses quiet and dependent. However, this order was never carried out. (pictured on the right, olive trees are side-by-side with grape vines.)

The oil (elion = olive oil) and the wine are considered to be luxuries by some commentators. They reason that these are plentiful in times of scarcity because there is no money with which to buy them. It is all a man can do to just keep his family fed.

Oil and wine were necessities in the Mediterranean area. How could one make bread without oil? Water was possibly polluted and would be dangerous to drink without having wine mixed in it. No person would drink wine undiluted except hard-core alcoholics wanting to get drunk — Bacchus cult members. “Eat drink and be merry, for tomorrow we die” was their mantra. (see Thomas and Macchia below.)

The Jewish practices called for 4:1 ratio of water to wine. Some even diluted it 10:1. The alcohol would have killed the bacteria in the water. So who could afford to drink polluted water without wine? These two are necessities.

The elites made more money from oil and wine than from wheat. The prohibition against harming these two items are made by Christ Himself.

III. Two Biblical passages important for us today in regard to food supply.

20 …Noah built an altar to the Lord and took some of every clean animal and some of every clean bird and offered burnt offerings on the altar. 21 And when the Lord smelled the pleasing aroma, the Lord said in his heart, “I will never again curse the ground because of man, for the intention of man’s heart is evil from his youth. Neither will I ever again strike down every living creature as I have done. 22 While the earth remains, seedtime and harvest, cold and heat, summer and winter, day and night, shall not cease.” (ESV; emphasis mine.)

Verse 22 is most instructive. God swears that the seasons will continue so that crops can be grown. Wars end, killing ceases, and famines come to a close at God’s appointed time! In all circumstances God is sovereign over the food supply!

B. The small minor prophet, Habakkuk is important for those who seek to do God’s will under the threat of War.

Note Habakkuk’s Prayer and Paean of Praise in his time of need!

Habakkuk in chapter one prays for God to deal with injustice that is widespread in Judah at the time. The Northern Kingdom had already been exiled and pagan populations had been settled in the midst of those who were left behind. Judah did not heed the warning God gave through the Assyrian White, Red, and Black horses that rode through their northern neighbors’ territory. However, Habakkuk almost loses heart when he hears about how God is going to answer his prayer for justice in Judah.

1:6 … behold, I am raising up the Chaldeans [Babylonians], that bitter and hasty nation, who march through the breadth of the earth, to seize dwellings not their own.

The White, Red, and Black Horses of the Babylonians are to ride over Judah and punish injustice.

Habakkuk ends his little book with hope for the ultimate future.

2:14 For the earth will be filled with the knowledge of the glory of the Lord as the waters cover the sea.

In the meantime, Habakkuk takes his stand and centers his thoughts on God! He doesn’t look to government or the military to help. He looks to God.

3:17
Though the fig tree should not blossom,
nor fruit be on the vines,
the produce of the olive fail
and the fields yield no food,
the flock be cut off from the fold
and there be no herd in the stalls,
18
yet I will rejoice in the Lord;
I will take joy in the God of my salvation.
19
God, the Lord, is my strength… .

In the West, we have plenty. I believe we ought to enjoy the fruits of our labors. However, there is a warning in the black horse for us as well. Billy Graham in Approaching Hoofbeats: The Four Horsemen of the Apocalypse warns us that if we do not heed God’s warnings to us “our lifestyle may spread itself out before us in judgment.” We ought always to be mindful of the needs of others. (see Graham below.)

Next time, the pale horse.