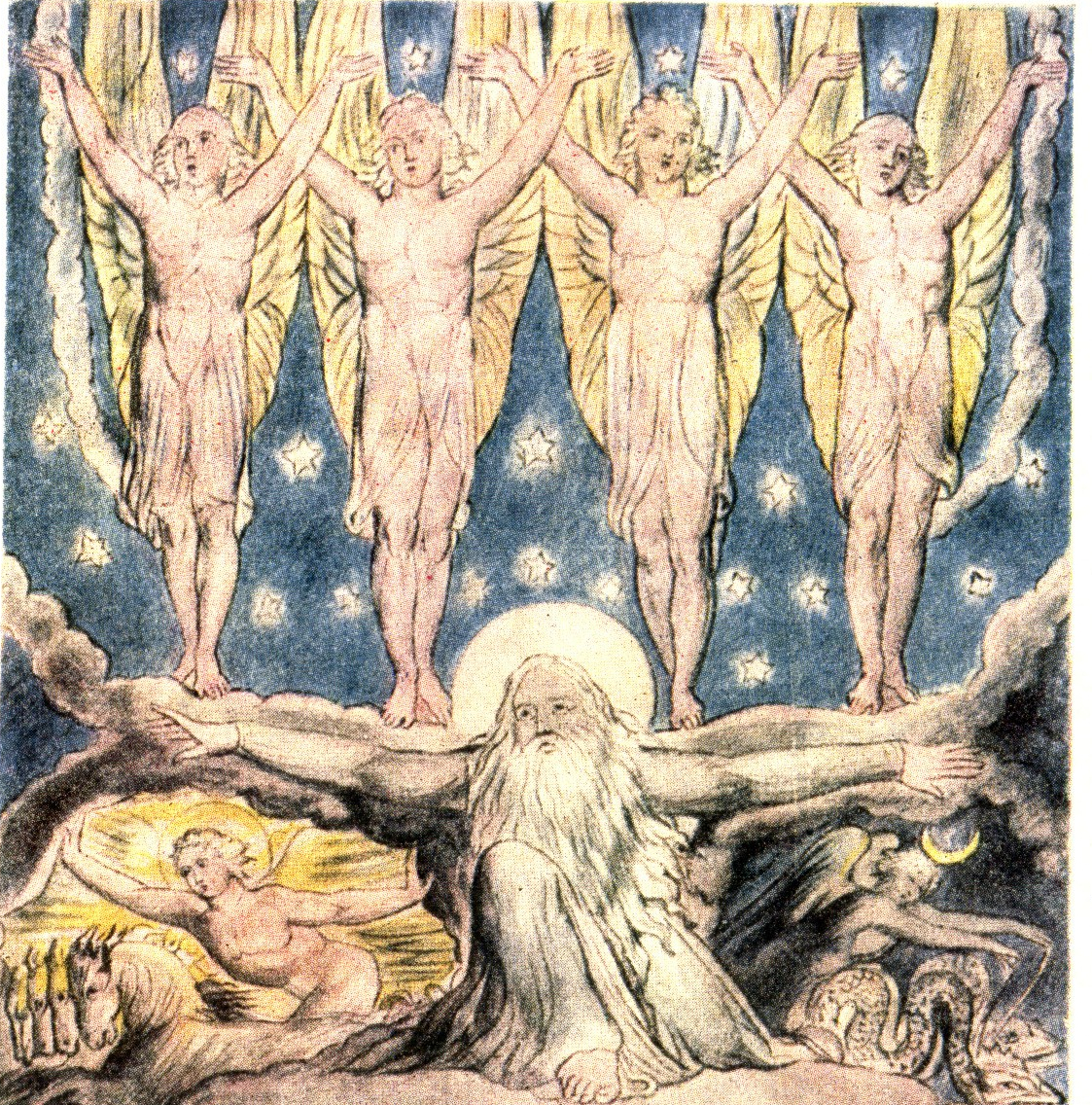 Picture above is Blake’s illustration from Job of “the Morning Stars Singing,” at creation.

We will look at how first Century believers would have seen this section and how we can apply it today.

The retinue of God’s throne-room is innumerable.

As one writer commented, “What Caesar would not have envied such a numerous retinue in the throne-room of God Almighty!” (source forgotten).

What is our first take way from this scene?

I. The innumerable retinue reminds us of the Lord of Hosts whom we serve.

11 Then I looked, and I heard around the throne and the living creatures and the elders the voice of many angels, numbering myriads of myriads and thousands of thousands 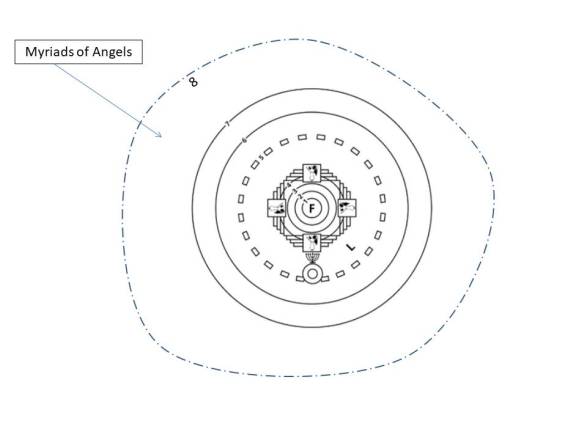 Very little of the Revelation can be pictured in a literal fashion, but above, I attempt to show the expansion of Heaven’s Throne-room from Chapter 4 to the end of Chapter 5. We will see a further expansion in Chapter 7. Remember the throne room is circular because it is the Biblical center of reality! Our solar system may be heliocentric, but reality is multi-tiered and centers on God’s throne.

Lord is YHWH, the tetra-grammaton of four Hebrew consonants. In the past, it has been transliterated with vowels to make it read “Jehovah.” But should be transliterated as “Yahweh”.

Hosts is Sabaoth in Hebrew meaning “armies” or “hosts”. (see BDB Lexicon on the OT.)

According to Alexander MacLaren’s Exposition, “by that title, ‘the Lord of hosts,’ the prophets and psalmists meant to express the universal dominion of God over the whole universe in all its battalions and sections, which they conceived of as one ranked army, obedient to the voice of the great General and Ruler of them all.” (see Heavenly Hosts below)

I once read of an atheist who was speaking outdoors to a crowd who had gathered to hear him speak. He ridiculed God and those who believed in Him. In desperation he cried out, “If there is a God, I call upon Him to strike me dead.” Since nothing happened at that moment he concluded there is no God to strike anyone. Little did he know that he was bitten by an insect at that moment. He scratched its bite-mark later. It became septic in a short while and he died two weeks after making the comment. (an old edition of Our Daily Bread devotional.)

A. God can use His insects to strike His and our opponents, but He doesn’t always strike out immediately.

I use insect as an example of God’s hosts because they are numerous and small. We use “Raid” to easily kill them in our homes. What if we were overwhelmed with a swarm?

Consider this recent news out of the Middle East and Northern Africa.

“The United Nation’s Food and Agriculture Organization (FAO) warned that an infestation of desert locusts in Sudan and Eritrea is rapidly spreading along both sides of the Red Sea towards Egypt and Saudi Arabia.

“These locusts are normally present in low numbers in the desert and don’t cause a big problem. But following a large rainfall they can quickly multiply, eventually forming hopper bands or swarms of adults, composed of billions of individual locusts,” Cressman told The Media Line. According to the FAO, locust swarms can extend outwards several hundred square miles, containing roughly 40-80 million adult locusts in each square mile. What makes these insects so dangerous is their threat to food security, says Cressman. (see Jerusalem Post below.) 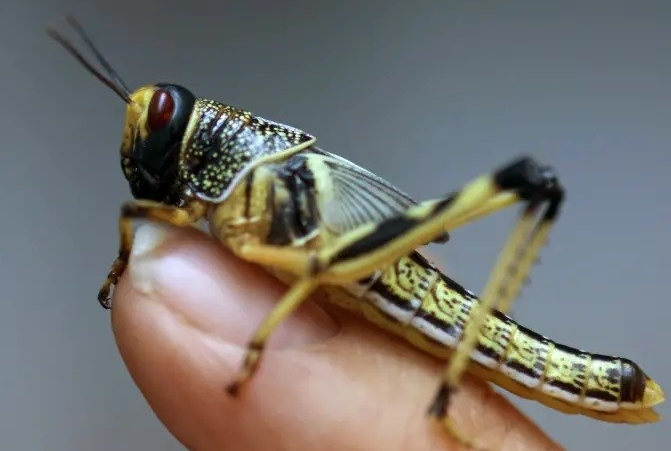 B. Realize also God can use His insects to feed people at the same time.

“Yeminis have found a unique way to deal with the plague of locust as “Yemenis are fond of eating locusts.

“One swarm covering one square kilometer contains 50 million locusts, and this swarm can eat the equivalent of 100 tons an hour. This may cause disaster not only in Yemen but also in other countries, such as in Saudi Arabia.”

“Villagers catch the locusts at night when they’re not flying, by throwing scarves or other large pieces of cloth over the insects to trap them and then sweeping them into bags using shovels or their hands.

“We wiped them out before they wiped out crops. In a matter of five hours, the village was free from any danger of the locusts.”

And I would add, they feasted on the former agents of destruction! Persecuted Christians are able to eat locusts in that war-torn country, also.

C. Our God is still Lord of Hosts!

People in John’s day saw in this passage a truth God taught in II Kings 6:8-20 (click on link to read the verses). Elisha’s servant needed to see “those who are with us are more than those who are with them.” God has not changed. Let us continue to pray that God’s kingdom will come here on earth and His will be done!

The Lord of Hosts can bring judgment and help from the same source. Think of what he can do with all creation in His service!

I hope you pray for the persecuted church around the world. Believers in N. Korea need supernatural sources of food and water to live through their current famine. See the story in Open Doors Ministries about North Korea.

C. S. Lewis says, “God whispers in our pleasures; He speaks in our consciences; but, He shouts in our pains!” 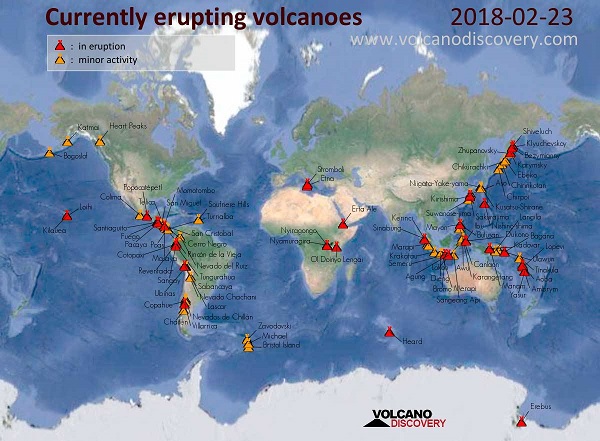 God is speaking through our planet’s weather convulsions! He is calling us to repentance, and we must listen to him and not to those who deny His existence.

The one fact about climate change that radicals won’t see is that much of it comes from the earth itself as God’s judgment on various sins.

Atheists’ answer to climate change is to blame everyone else while they fly on private jets to spread the blame.

More on this passage next time.