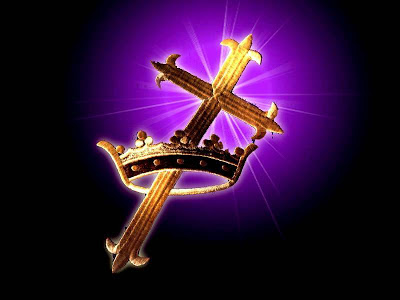 We saw last time Christ, the apocalyptic, Warrior-Lamb of God, step forth and prepare to take the scroll from the hand of the Father.

Rev. 5:6 And between the throne and the four living creatures and among the elders I saw a Lamb standing, as though it had been slain, with seven horns and with seven eyes, which are the seven spirits of God sent out into all the earth.

III. Our Lord pours forth the Holy Spirit upon his people who keeps watch over and empowers them during their earthly sojourn.

The seven horns symbolize perfect strength. The seven eyes symbolize the Holy Spirit. Through the efficacy of the death and resurrection of the slain Lamb, the Spirit of God has been sent forth into the world.

The background to this figure is Zechariah 3 & 4. In these chapters, the eyes are pictured as the seven-fold Spirit of  God sent to gather information and to observe the progress on the temple. The occurrence here in Rev. 5 seems to point to the world-wide ministry of the Spirit as a result of the death of the Lamb.

vs. 7 And he went and took the scroll from the right hand of him who was seated on the throne.

IV. Our Lord assumes the Mediatorial Kingdom His Father has Given to Him as reward for His Suffering and Death.

He came and took the scroll — John uses the perfect tense of lambanô (“to take” or “receive”) to indicate that the Lamb took and retained the scroll. The right hand is symbolic of the place of power and authority. No one could have taken anything out of the right hand of God unless he had the right and ability to do so. This adds to our appreciation of the true nature of the Lamb. He is indeed the second person of the Trinity.

Christ’s Office as King from the Westminster Shorter Catechism

Q. 26. How does Christ execute the office of a king?

A. Christ executes the office of a king, in subduing us to himself, in ruling and defending us, and in restraining and conquering all his and our enemies.

Two Distinctions from Fisher’s Catechism that help us understand Christ as King.

A. It is that absolute and supreme power, which he has over all the creatures in heaven and earth, essentially and naturally, as God equal with the Father, Psalm 103:19 — “His kingdom rules over all.”

A. It is that sovereign power and authority in and over the [entire cosmos for the church’s benefit], which is given him as Mediator, Ephesians 1:22 — And he put all things under [Christ’s] feet and gave Him as head over all things to the church… .

Let’s picture Christ’s self-humbling and the Father’s subsequent exaltation of Christ as found in Philippians 2:5-11. 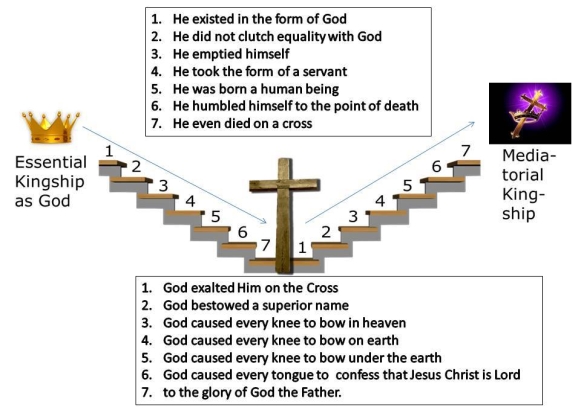 Note this exaltation is not only in the future. It is true now! It was accomplished at the Ascension of our Lord. Hebrews 2:5-9. We do not see all subjected to Christ at present. However, we do see Christ crowned with glory and honor with the eye of faith.

Two Days and the In-between Time

We live between two days. It is like our grandparents lived through the Day of Days (D-Day)  in WWII. For all intents and purposes, the war was lost by Axis Powers with that invasion. They didn’t accept it, however. Another day came Victory in Europe Day (VE-Day)! On this last day of the War, the enemy vacated the battle field and surrendered.

All the Evil One’s forces were defeated on Calvary when Christ died on the cross and rose from the dead. The enemy will finally be forced to vacate the battlefield and surrender at the second coming of Christ. We live between these two days.

As a church under persecution, Christ would have us know He has already won the victory. The time between the two days is the mopping up operation.

Do not give up or lose heart! Or as John Paul II said to the Polish people during his visit under the Communist regime, “Be not afraid!” The communist regime soon fell and Poland was free once again.

More next time on the sealed scroll.