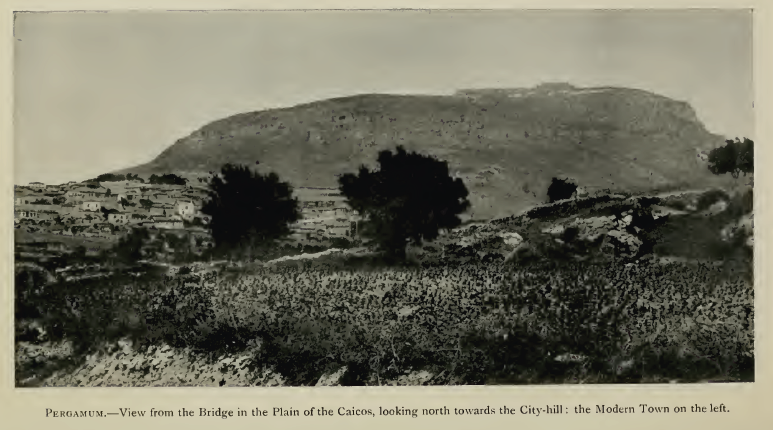 God’s People must stand firm where they are!

2:13 “‘I know where you dwell, where Satan’s throne is. Yet you hold fast my name, and you did not deny my faith even in the days of Antipas my faithful witness, who was killed among you, where Satan dwells.

The Risen Christ says to the Church at Pargamum — I know where you live — To other churches, Christ says “I know your works.” To Pergamum he says that he is aware of where they live — their environment and living conditions.

The place where Satan’s throne is may refer to the citadel where the temples were or generally to the presence of idolatry throughout the city. Many take this as a reference to the Emperor Cult (see picture of the Altar of Pergamum above).

Pergamum had so far had only one martyr — Antipas. Scholars correctly see that widespread persecution had not yet arisen against Christians in Asia Minor. It was spotted and varied in intensity. However, John with prophetic insight sees that Antipas’s martyrdom is a specimen of what is to come in the 2nd Century. [see Fee below].

God’s people must resist teaching that goes against God’s Word. vs. 14-15

The un-churched (unsaved), will never be reached by a watered down teaching and preaching. We will never attract the youth to Christ mimicking Hollywood and secular musicians. I was quite disturbed a number of years back when students introduced themselves to the class as “ex-Christians.” They were from mainline churches that had accommodated their message and techniques to the world. I John 2 applies to us —

The false teaching at Pergamum is described as the teaching of Balaam — cf. Numbers 22:1-25:9 (click on the scripture reference if you wish to read this passage in full).

Balaam is a prototype of all corrupt teachers who betray believers into fatal compromise with pagan religions in exchange for money. Balaam would not curse God’s people directly, but he suggested a way to corrupt them so God would curse them. Balaam’s name became a biblical catchword for false teachers who for financial gain sought to influence God’s people to engage in ungodly practices (Deut. 23:4; Neh. 13:2; 2 Pet. 2:15; Jude 11). [See Beale, p. 66, below]

Balaam’s error involved eating food sacrificed to idols — participation in pagan idol feasts. These were connected to the trade guilds (collegia in Latin) that people had to be a member of to find work. The attempt of certain groups to work out a form of compromise, so essential to the social comfort, and indeed livelihood of many Christians, led to the strong reproaches of 2 Peter, Jude, and Rev. 2-3.  [see Trade Guilds below]

God’s people cannot tolerate in the Church those who lead others astray. vs. 16

16 Therefore repent. If not, I will come to you soon and war against them with the sword of my mouth.

Note that there is a distinction between “you” and “them.” The judgment is to fall on those who follow Nicolas and Balaam, not the faithful who shun them.

God rewards his faithful followers with intimate fellowship with Himself. vs 17

17 He who has an ear, let him hear what the Spirit says to the churches. To the one who conquers I will give some of the hidden manna, and I will give him a white stone, with a new name written on the stone that no one knows except the one who receives it.

Symbols from the Old Testament are used to describe the reward of the righteous who do not succumb to false teaching. Hidden manna pictured the sufficiency of Christ in contrast to the allurements of the world. This is intimacy of fellowship begun here and consummated in glory hereafter. The figure comes perhaps from the hidden pot of manna placed within the Ark as a memorial in Moses’s day. 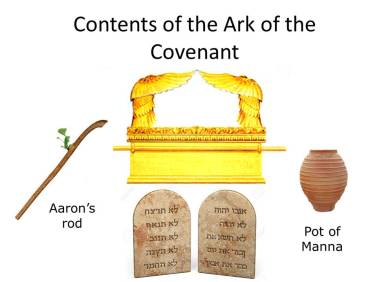 The white stone is a little bit more enigmatic.  The figure could possibly come from the custom of judging by placing a white or a black stone in a urn. The white stone meant acquittal and the black one meant guilty. Also, white stones were given as tokens of admission to banquets.

The Risen Christ promises to give them a new name. “Name magic” was strong in the East of John’s day. If one knew a god’s name, one could use it to gain influence and power from that god. This “new name” could be the name of Christ revealed to the Christian. It also could be a “new character” given by Christ to the believer at his/her conversion. Remember, Abram (“exalted father”) became Abraham (“father of many nations”) after his religious conversion.

Christ promises His Presence with His people in time and in eternity.

All these cryptic symbols point to the fellowship we will share with Christ in Glory! It has already begun here below in part, but will be to the fullest in the hereafter.

Here is a traditional version of Anne Ross Cousin’s old hymn. (Lyrics are on screen)

Mrs. Cousin had become enamored with Samuel Rutherford (1600-1661). She set parts of his diaries from his prison stay in Aberdeen, Scotland, to verse. She wrote this hymn from his experiences recorded while imprisoned there for the Gospel’s sake. Rutherford famously said,

“I would be content to live in this prison cell forever, if only I could see Christ through the keyhole every thousand years.”

No wonder he signed his letters, “God’s Palace, Aberdeen.”

God has many ways of revealing himself to his people that compensate for their sufferings and tribulation!

Application Chart of the Pergamum Letter to Us Today 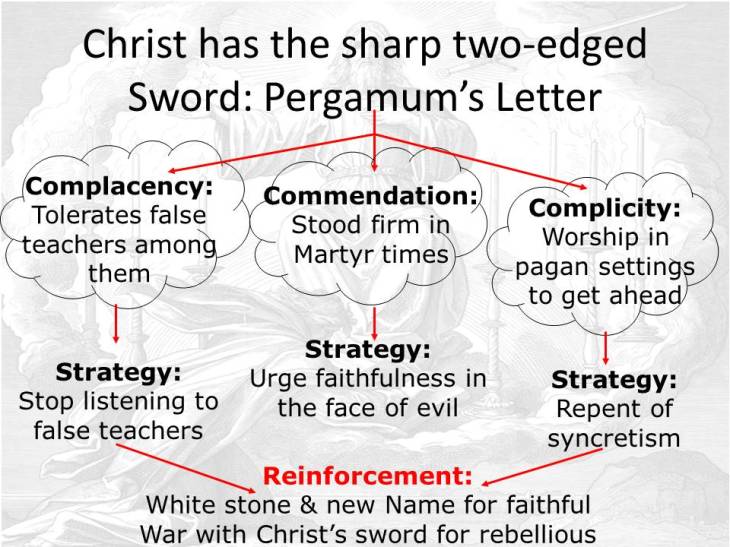 We see in the Letter to Pergamum the same three areas we’ve seen in Ephesus and Smyrna Letters:

I. Christ commends us when we stand firm in the face of evil all around us.

Some today are dying for Christ in the dark places of our world — Asian dictatorships; Middle Eastern oppressive countries; chaotic African countries with marauding gangs of thugs.  Others are suffering deprivation, torture, chemical injections, etc. Christ urges us today through this letter to stand firm in the face of evil. We must also pray for those who are experiencing persecution. Hebrews 13:3 “Remember those who are in prison, as though in prison with them, and those who are mistreated, since you also are in the body.”

II. Christ urges us to stop listening to false teachers.

In our day, the television is filled with false teachers. If we listen to them, we will be weakened in our faith so we cannot stand faithfully should persecution grow stronger here. False teachers are not to be listened to since they are “wolves in sheep’s clothing.” Liberal churches may have the teachers with the best credentials from the best universities, but they are still false teachers.

Acts 5 states this clearly — 27 And the high priest questioned them, 28 saying, “We strictly charged you not to teach in this name, yet here you have filled Jerusalem with your teaching, and you intend to bring this man’s blood upon us.” 29 But Peter and the apostles answered, “We must obey God rather than men.” So must we, with God’s help!

Next time, we look at the Letter to Thyatira!