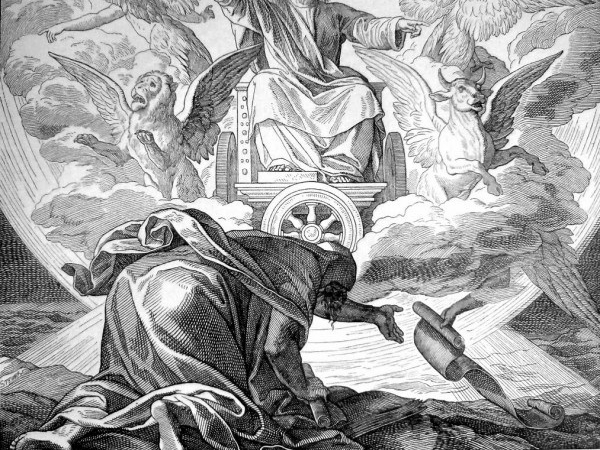 12 Then I turned to see the voice that was speaking to me, and on turning I saw seven golden lampstands,
13 and in the midst of the lampstands one like a son of man, clothed with a long robe and with a golden sash around his chest.
14 The hairs of his head were white, like white wool, like snow. His eyes were like a flame of fire,
15 his feet were like burnished bronze, refined in a furnace, and his voice was like the roar of many waters.
16 In his right hand he held seven stars, from his mouth came a sharp two-edged sword, and his face was like the sun shining in full strength.

As we saw in the previous post, Jesus Christ appears in Revelation 1:12-16 as Priest-King of his people.

The Ancient world was filled with statues and temples. Believers in Christ couldn’t get away from pagan gods and priests. In our approach to Revelation we often do not take into account the significance of

public statues in the ancient world. The one of Nero, pictured left (Colosseo), gave its name to the gladiatorial arena eventually erected near it — the Colosseum.

I have seen one such smaller statue in Ephesus which was intentionally headless so it could be changed depending upon who was the current Emperor. The statue always had an Augustus-like appearance (except the “Colosseo” of Nero).

John has in his vision a Figure far larger than anything dedicated to an Emperor of Rome.

The Vision in Revelation 1:12-16 and the Book of Daniel

In this passage, understanding Daniel’s images helps us understand Revelation. John often uses the Old Testament language to describe what he’s seen and heard. (emphasis mine; see 7 Tips below).

Old Testament Background to the Vision of Christ

John now relates his vision of the Son of man. The vision is drawn from Daniel—

Jesus Christ is the fulfillment of Daniel’s Son of Man who receives a kingdom from the Ancient of Days.

The Kingdom is not a futuristic, earthly Kingdom, but is a spiritual Kingdom inaugurated at Jesus’s first appearing and will be consummated at the second coming. The “Kingdom of God” [is] the ‘rule of God.'”

Should [“Kingdom of God”] be understood statically as denoting a realm or place? If this is correct and”kingdom” refers to a territory or piece of real estate, then it is evident that the kingdom of God cannot have arrived.

Both in the Old Testament and in the New Testament the term “kingdom” is understood as dynamic in nature and refers primarily to the rule or reign of a king. It is seldom used in a static sense to refer to a territory. (See Baker below).

ESV. English Standard Version of the Bible accessed from https://www.biblegateway.com