4 John to the seven churches that are in Asia: Grace to you and peace from him who is and who was and who is to come, and from the seven spirits who are before his throne,
5 and from Jesus Christ the faithful witness, the firstborn of the dead, and the ruler of kings on earth. To him who loves us and has freed us from our sins by his blood
6 and made us a kingdom, priests to his God and Father, to him be glory and dominion forever and ever. Amen.
7 Behold, he is coming with the clouds, and every eye will see him, even those who pierced him, and all tribes of the earth will wail[a] on account of him. Even so. Amen.
8 “I am the Alpha and the Omega,” says the Lord God, “who is and who was and who is to come, the Almighty.”

We Now have Access to God’s Throne of Grace

vs. 6 and [He] made us a kingdom, priests to his God and Father, to him be glory and dominion forever and ever. Amen.

Jesus constitutes His church as the new people of God in the New Testament era. Here is another echo from Exodus; this time from 19:6 — “You shall be to me a kingdom of priests and a holy nation.” What was true of Israel of old is now transferred to the Church in Rev. 1:6. This was made possible because of Jesus’s work on the cross. We now have access to the throne of grace as a Kingdom of Priests! (see Hendriksen, p. 68, below). Hebrews 4:14-16 — Click on the link to read this passage.

I like what one of the old Puritan Divines said, “We may not be of God’s council, but we are thankful, nevertheless, we are of his court.”

Also, we may not have access and favor from the halls of power on earth, but we can enter into God’s Holy Place in prayer to ask our God to intervene in our lives. An old hymn brings me much comfort in trial—

You are coming to a king;
Large petitions with you bring.
For his grace and power are such
None can never ask too much.

Hebrews 4:16 gives us the resources we need to deal with any and all trouble that comes our way! God’s throne is a throne of judgment to those who oppose Him. However, it has been transformed into a throne of grace for His children.

We serve the true ruler of this world when we bow the knee to Jesus Christ as our Lord and Savior. More importantly, Christians derive their identity from Jesus Christ. Since we are adopted into the family of God, we are children of the King of Kings!

When you are tempted to pity your circumstances in life or to give up in the fight remind yourself, as do I — “I’m a child of the King!”

A former pastor used to say that the highest title you can have in this world is one given to Daniel — an MGB — “Man Greatly Beloved.” Daniel 10:11—[Click on link to read.]

Caesar was not God in the 1st Century

Jesus’s kingship would be directly relevant to the Asia Minor churches since the Emperor Domitian had required his attendants to call him Dominus et Deus (in English = “Lord and God”). He was the last of the Flavian Emperors following his brother Titus and before him their father Vespasian. Domitian made both of them gods after their deaths. This particular blasphemy to Christians is deification of any person, the Emperor included, dead or living. (see Domitian below).

Caesars changed frequently regardless of their claim to deity while living or after death by others. (Vespasian was the fourth emperor in one year’s time, see picture above.) As we read Revelation, we should give attention to the worship of Emperors as Divine since Asia Minor was accustomed to regard their rulers as offsprings of the gods.

“Emperor worship served as a way for subjects of Asia [Minor] province to come to terms with imperial rule within the framework of their communities. Religious practices were very much a public affair and involved citizens in all its aspects including prayer, sacrifice, and processions. Rituals held in honor of a particular emperor frequently outnumbered those of other gods.” (see Asia Minor below).

The State is not God in the 21st Century!

In the West we are witnessing the divinization of the State. Hegel’s maxim is in force, “The state is God walking on earth.” What blasphemy! However, if there is no God for many today, and sin is in the environment, the state is supposed to heal our hurts with health care, a place to live, and a job. All free!

We cannot look to a “Nanny State” for salvation any more than Asia Minor could look to Rome for it. Money won’t save us. Fame won’t save us. A place to live free of charge won’t save us. “Only a Holy God!” can save us in time and in eternity.

What is of Ultimate Concern to Us is our God

I deplore the theology of the man who said this — “Religion is whatever is of ultimate concern to us.” (It is true, in spite of his warped theology.) The dictionary expands the definition of religion to “a pursuit or interest to which someone ascribes supreme importance.”

To Christians, no matter what the cost, our ultimate concern is total devotion to and worship of the Triune God as He is revealed in Holy Scripture. All other things in our lives take their proper place when Christ is in first place! 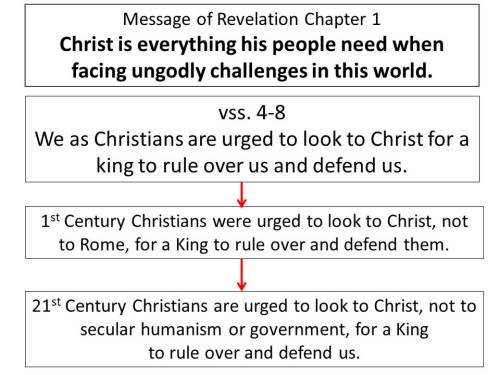 God is our “Safe Place”

“My very first job was at a fast-food restaurant. One Saturday evening, a guy kept hanging around, asking when I got out of work. It made me feel uneasy. As the hour grew later, he ordered fries, then a drink, so the manager wouldn’t kick him out. Though I didn’t live far, I was scared to walk home alone through a couple of dark parking lots and a stretch through a sandy field. Finally, at midnight, I went in the office to make a phone call.

And the person who answered—my dad—without a second thought got out of a warm bed and five minutes later was there to take me home.

The kind of certainty I had that my dad would come to help me that night reminds me of the assurance we read about in Psalm 91. Our Father in heaven is always with us, protecting and caring for us when we are confused or afraid or in need. He declares: “When they call on me, I will answer.” (Psalm 91:15 nlt)

Our King from the perspective of His throne, keeps his watch over us as believers. He defends us against all [that] would harm us.” (See Kasper below.)

Defense of His children is what our King does. We need never fear the authority of the One who died for us! We are in the secret place of the Mose High when bow before His throne and seek his presence when we are in trouble.