I heard a pastor telling his television congregation that he was committed to the autonomy of each individual congregation. He went on to say that he even be­lieved that each member of his congregation was autonomous.

“No one can tell anyone else what to do,” he added.

This sounds very American. However, this sentiment is in reality the essence of a sinful autonomy. At the heart of autonomy is the spirit of rebellion against all external authority, and ultimately, even rebellion against God’s own legitimate authority. 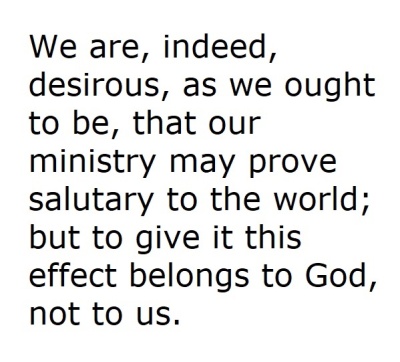 Quotation from John Calvin’s The Necessity of Reforming the Church

All these expressions are very American, but they are also unbiblical in the extreme. Total autonomy for the individual is a result of a radicalized view of freedom.

The subtitle of Bork’s tour de force, Slouching towards Gomorrah is: Modern Liberalism and American Decline. According to Judge Bork, the defining characteristic of modern liberalism is “radical individualism.” In essence this falsehood reduces “the limits to personal gratification.” It wrongly surmises “the individualist[s] pleasures can be maximized only by freedom from authority,” Bork points out.

…When egalitarianism (belief in equality of outcomes) reinforces individualism, denying the possibility that one culture or moral view can be superior to another, the result is cultural and moral chaos, both prominent and destructive features of our time. (Bork, Slouching towards Gomorrah, p. 5)

Our lifestyle of unbridled gratification has unleashed the chaos we see all around us today. We do not have to participate in it, though.