In the last post we shifted to the last reason why Jesus’s Lordship is essential to the Christian life.

This is based upon Romans 14:9—For to this end Christ died and rose and lived again, that He might be Lord of both the dead and the living. 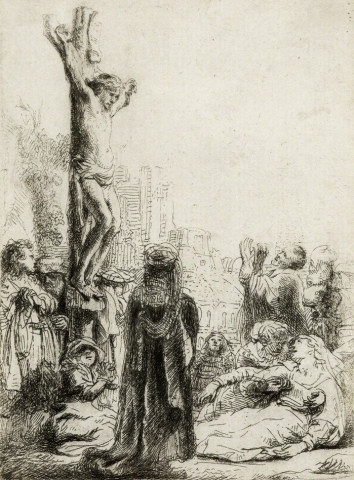 Rembrandt Etching of the Crucifixion (left);
Gustave Dore etching of Angelic pronouncement “He is not Here!” (right)

Jesus emerged from death victorious and returned to the realm of the living.

No one ever emerged from that murky underworld alive in the sense Jesus did. We have three persons mentioned in the New Testament that were raised from the dead. They were not raised to immortality, however. They were resuscitated. I like what one writer has said about the three, “They were the three most pitiable people to be imagined. They had their dying to do all over again.” Jesus emerged from Hades raised in a glorified body. That body now sits at the right hand of the Father in glory. Scottish theologian and pastor “Rabbi” John Duncan well said, “The dust of the earth now sits on the throne of the universe.”

Heaven is not a weird place seemingly extra-terrestrial and twilight-zone like. It is home because our Lord is there in his earthly, glorified body. His going to prepare a place for us should give us a sense of security. He holds the keys of death and Hades according to Revelation 1:17-18

17 And when I saw Him, I fell at His feet as dead. But He laid His right hand on me, saying to me, “Do not be afraid; I am the First and the Last. 18 I am He who lives, and was dead, and behold, I am alive forevermore. Amen. And I have the keys of Hades and of Death.”

So many people depend upon relationships with people on earth for their security. Their maxim is “It’s who you know that’s important.” Maybe so in business, but I agree with Vance Havner, “You don’t have to know the key people when you know the One who holds the keys!”

Q. What is your only comfort in life and in death?

A. That I am not my own, but belong—body and soul, in life and in death—to my faithful Savior, Jesus Christ.

Next time more about our Lord’s resurrection and how it is related to our and our loved ones ultimate security.